Since last weekend we have a new feature in our landscape. We can't see it but we sure as heck can hear it!
The first time we heard it, sometime late last week, we bolted upright wondering what on earth was going on! The cats  were pretty startled too.
First thought was it was a rifle, but the hunting season doesn't start until the autumn. Because of the way the land immediately around us undulates and forms little valleys the reverberations were impressive and sounded very similar --to our non-shooting ears-- to the crack of a hunting rifle.
So we were somewhat perturbed at first... but after a bit we realised it was happening a fairly regular intervals. Sometimes it was louder, sometimes fainter due to the wind we've been having most days but the direction remained static so... it could only be one of those sonic boom bird scarers.
It carries on 24/7 and now it has become so much part of the background we hardly notice it anymore. The cats too have become very blasé. They came along when we went on a walk down the unpaved chemin round the back of us and which took us closer to the sound.

We couldn't see it; so we think it's on the next ridge and there's a little valley between us and no footpath or track leading up there. 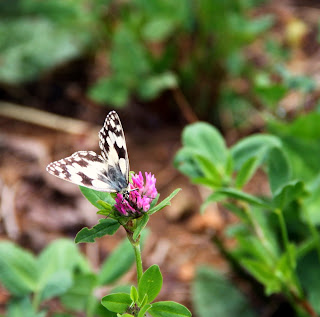 While out looking for the boom we saw some butterflies and took a pitcure of this one enjoying the clover.


Bruneau, whose farm -- brebis [ewes]-- lies close to us came to cut the hay in the field which forms our eastern boundary a couple of weeks ago and the field next door to it has now been newly sown. They've left the white plastic bags as scarecrows. We don't know what's been sown but presumably over the ridge they've sown too and hence the booms. You can see in the photo that the field, mostly clover, has started to re-grow due to the bit of rain we've been having. It's not been much but it has helped a little.

Hello Niall and Antoinette:
You now live with a 'boom' and from time to time in Brighton we also have a 'boom', but in that case it is of the foghorn warning ships rather than scaring birds as in your case. What is so surprising, as you say, is the fact that one gradually becomes unaware that it is happening at all. But, as for the 'boom' going on all day and all night, we certainly do not envy you that!

Not much chance of a sneaky forty winks in the day then!

That's a lovely shot of the butterfly!

@Jane & Lance-- it goes off at about 5 min intervals. Yesterday it was wind still so came across very clearly.