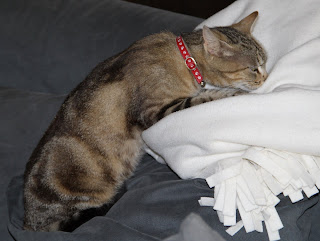 Our two cats, as one would expect, are masters at finding nice warm comfy places to snooze. When it was hot they made themselves little nests in shady places such as in the heart of a dense bush. Recently we've had rain showers and the temperature has dropped to the high teens, so they have migrated indoors once more for their naps.
Naturally both look favorably on soft squidgy surfaces to settle down on if human laps are not to be found; duvets, old jumpers etc... and in Tinka's case fleece. She has, not to put too fine a point on it, an obsession with fleece. 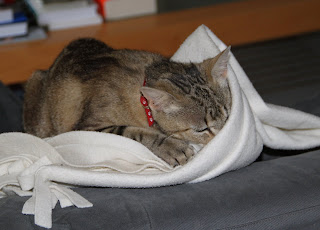 We first noticed this when a friend left a fleece on the sofa. We found Tinka nose-deep kneading like there was no tomorrow. She had the kind of expression one usually sees on cats who have had a catnip toy. It is only fleece which generates this reaction as you can see in the photos. Other soft things get the 'normal' kneading treatment. Not the "let's stuff my face in" reaction anything made of fleece gets. As it happens we have 2 fleece blankets bought at Ikea so cue one happy Tinka! 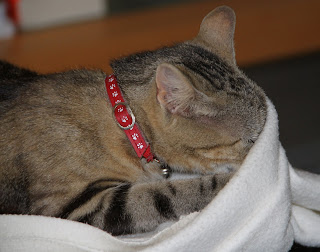 For those of you who wonder if 'poor' Shadow draws the short straw--don't. He 'owns' the bed and routinely hogs it. In fact he's not above pushing one of us to the edge while making himself 'comfortable'! He's just a bit camera shy; something we can't say about Tinka!
Posted by Niall & Antoinette at 10:52

Why do I know that if I come back as a cat or dog, it won't be in a home like your two or our pampered Boris... I'd be chained up somewhere!
Ours don't know that they are living!
Coincidently I signed up to a a monthly donation to Dogs Trust today which looks after dogs who cannot be re homed due to medical or other issues... they never put a dog to sleep.

I quite like a fleece blanket on a cold day as well!

Cats are the most amazing creatures. I'm always wondering what is going on in their mind. I'm sure there is a very reasonable explanation for Tinka's behaviour. Pity she can't you what it is :)

That description and the pictures -- I think I'm off back to bed and some nice cozy fleece of my own!

@Craig--pampered doesn't even come close does it? :-) We always have had rescue cats and supported our local rehoming centre. Shadow comes from cat rescue in Maastricht and Tinka was found abandoned as a kitten not far from here. People who knew us knew we'd give her a home if Shadow would accept her. She's been queening it since she arrived in Ocotber.

@Martine--very likely. It could have something to do with smell or being abandoned very young; who knows? Just wish I could 'speak cat' :-)

@TheBroad--agreed! On a chilly rainy dull day it is very tempting. :-)

Our Ron-Ron is a glue sniffer... I wonder if the kneading releases solvents used in the manufacture of the old plastic bottles... or their conversion into fibres?
All cats are drug addicts... Baron had to have a tick removed earlier today. He chilled out after the trauma by sucking his catnip fish... and everything was "awlriggght man!" after that....

WV is "rishle"... the sound a cat makes when sucking a catnip toy!

@Tim--Don't you just "love" the wet soggy catnip toys they leave lying around for us to pick up once they've finished? That is if they haven't strewn the contents all over the floor!