All this past week and a bit we've been harvesting mirabelles. Lots of mirabelles....

To be honest until about two weeks ago we didn't even know we had them! That may sound odd, but until now, neither of the two miralbelle bush/trees produced much in the way of fruit, so we didn't take much notice as to what they were. They flower early in March and we had speculated as to what they could be here in a post a couple of years ago.

The mirabelle de Nancy is a small yellow plum, whereas the mirabelle de Metz is yellow with a lovely orange-red blush. Our blush mirabelle is much smaller than our yellow mirabelle and the actual tree is more of a bush, so we think it is probably a self-seeded renegade [hybrid wild plum]. All in all, we took at least 6 kgs of fruit off the trees, the majority being yellow mirabelles; but there's still plenty left on there for the birds.

Traditionally in Alsace-Lorraine these plums are used to make a version of 'clafoutis' a French baked desert. Here's a link to a simple recipe [in French]. The city Metz has an annual 'fête de la Mirabelle de Metz' which celebrates all things to do with these little plums, including their transformation into a mirabelle eau de vie.

Our mirabelles are tucked up in the freezer for future baking and jam making.
Posted by Niall & Antoinette at 10:14 14 comments: 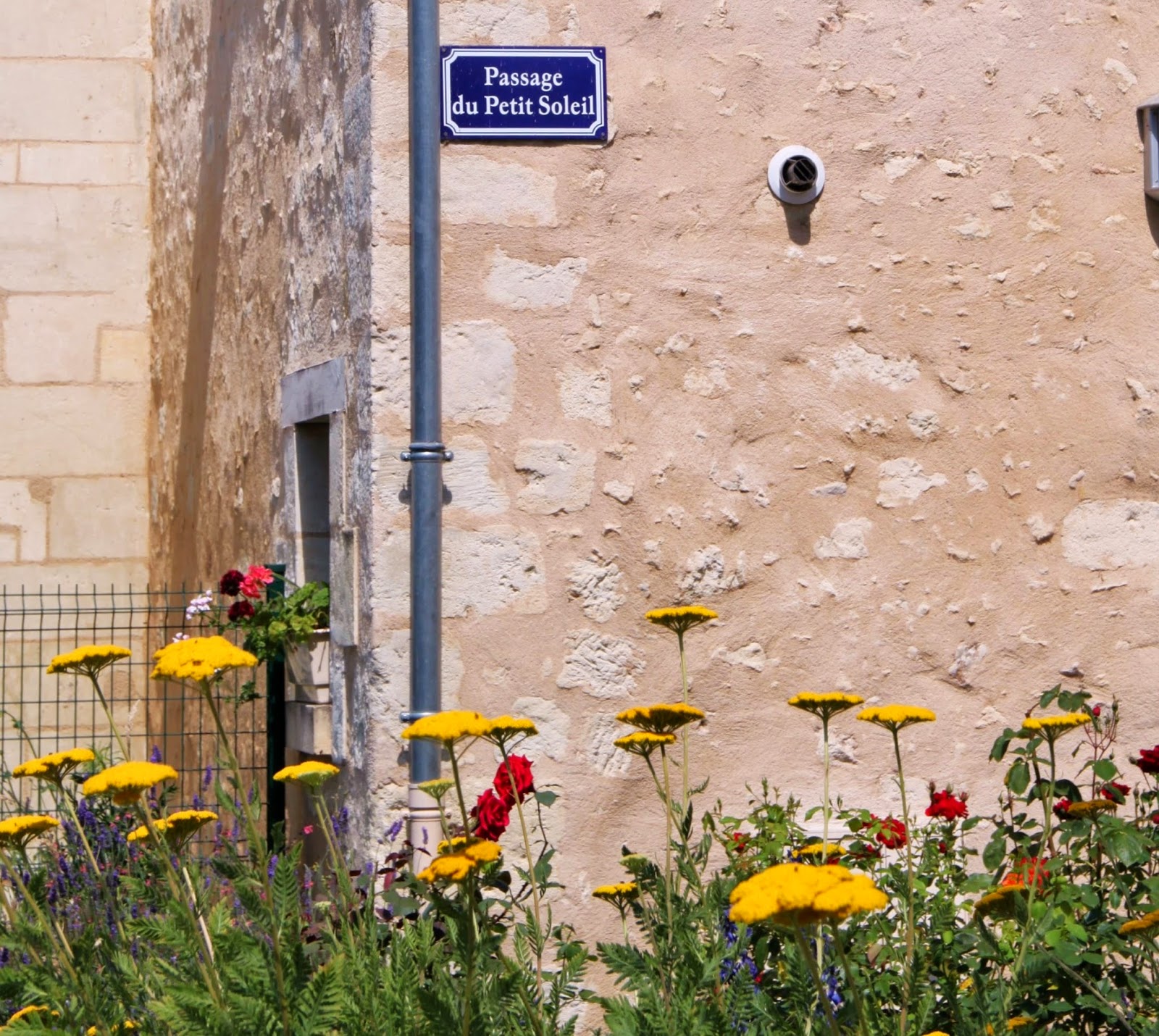 Azay-le-Rideau - not the chateau


Azay-le-Rideau was once known as Azay-le-Brulé on account of an 'insult trading session' in 1418 between the Burgundian garrison who held the village and the Dauphin, [the future Charles VII] who was on his way from Chinon to Tours. In reprisal for the insults hurled at him he ordered the garrison executed and burnt Azay. The name le-Brulé was current until the 16th century.

On previous visits to Azay-le-Rideau we've visited the beautiful Renaissance chateau which we've written about here and here, and wandered its streets; but for some odd reason we never had a look at the church -- something we usually do. Last month we finally rectified the situation.
The church is special because it has the most lovely façade. Once the church formed part of a monastic settlement that fell under the jurisdiction of the Abbey de Cormery, and it is marked on the Abbey's 11th century maps. However, only the church now remains and functions as the parish church. The rest has long gone but would have stretched out into the grounds of the chateau which lies just beyond the wall in the foreground of the 1st photo.
However, well before the 11th century there was an even earlier church on this site. St-Symphorien retains part of a, possibly Merovingian, or Carolingian façade. What remains is what one can see on the right-side; the original single-aisled church. The, probably 6th century, [no one is quite sure just how old it is] façade is dominated by pyramidal or bell-like shapes and rows of figures which the 11th century masons simply incorporated into new larger church they were building. Looking at the way the design has been chopped off it may well be that the 6th century version wasn't gabled, unlike the 11th century expansion. Later in the 13th century a window was punched through the lower row of figures. In the top row one can make out Christ in the center --he's got a nimbus with a cross-- holding a book. To his left are three haloed saints. The figures to his right do not have halos. As with the upper row of figures the lower row has a mix of haloed and non-haloed figures. There are four haloed saints on the left [as you face the building] and three non-haloed figures on the right. Which saints they represent is uncertain, nor have the non-haloed figures been identified. At a guess the latter are prominent ecclesiastics.

Two other carvings at either end of a corbelled ledge are of hunting dogs. On the left are two dogs facing each other and to the right are another two actively hunting. In this carving on the right [as you look at the front of the church] the leading dog has caught what looks to be a hare and the other dog is chasing it. If you enlarge the photo by clicking on it you should be able to see the teeth the mason carved in the jaws of the first dog. The corbels are carved with what look to be animal heads.

Much later, in the very late 15th/early 16th century the church was again enlarged and a second nave was added. This left-hand side façade has a more steeply gabled roof line and the window above the door is in the flamboyant gothic style typical of the very late middle ages.
Posted by Niall & Antoinette at 14:48 8 comments:

Bréhémont is a little place on the left bank of the Loire. Nowadays it is a sleepy place, although in the summer season it is busy with cyclists who bike along the Loire and Cher rivers.
First mentioned in the 9th century, it re-appears in a charter by Olivier de Langeais dated 1214. Later it belonged to the monks of Saint-Martin de Tours who passed it on to the Seigneurs of L'Île-Bouchard and in 1692 it became part of the newly created Marquisate of Ussé.
However, by the 19th century Bréhémont was a very busy little place indeed, as it had become the centre for hemp cultivation in Touraine. This explains the rather expansive quayside, or 'port' as the French call it on the river Loire which is still there today.
Hemp was used to fashion ropes, [and later used in the paper-making industry] and there was a huge demand for it. According to an informative post we found on a website maintained by locals, hemp was being cultivated in Bréhémont from about the 13th century onwards. Certainly from the late 18th century hemp from the village was well known and sought after. So much so, that apparently there was a bit of a scandal when, in 1840, hemp from the Sarthe region was found to have false certificates of provenance indicating that it was "d'origine de Bréhémont". In 1850 about 4,500Ha was under hemp cultivation in Touraine and virtually all of the land in the village was given over to the crop. During this heyday the village had a population of 1,850 whereas now there are only about 800 living in the commune. The demand for hemp waned and by 1929 only about 200Ha was given over to hemp growing; most of it in, and around, the communes of Bréhémont and Rigny-Ussé. By 1980 cultivation had ceased, as up till then a small amount had still been grown for the paper industry.

The village of Bréhémont's UNESCO girouet has a hemp plant and an anchor as its symbol.