The forecast says that we are going to be in for a week of colder weather; we might even see a few snow flurries. It would be lovely if we got a week of the clear blue skies and sun such as we had during our visit to Chenonceau.

Recently we've mostly had days and days of grey, rainy weather. In fact so much rain that the  "ponds" reappeared at the back. Thankfully they have subsided a little today but the ground is still very boggy.

However, on the positive side the snow drops have been out for a number of weeks and the early daffs have very fat buds. Earlier this week we even saw a daffodil in a sheltered spot in flower.

These views taken at Chenonceau in December serve as a reminder of the beautiful blue skies we can have here, even during winter. 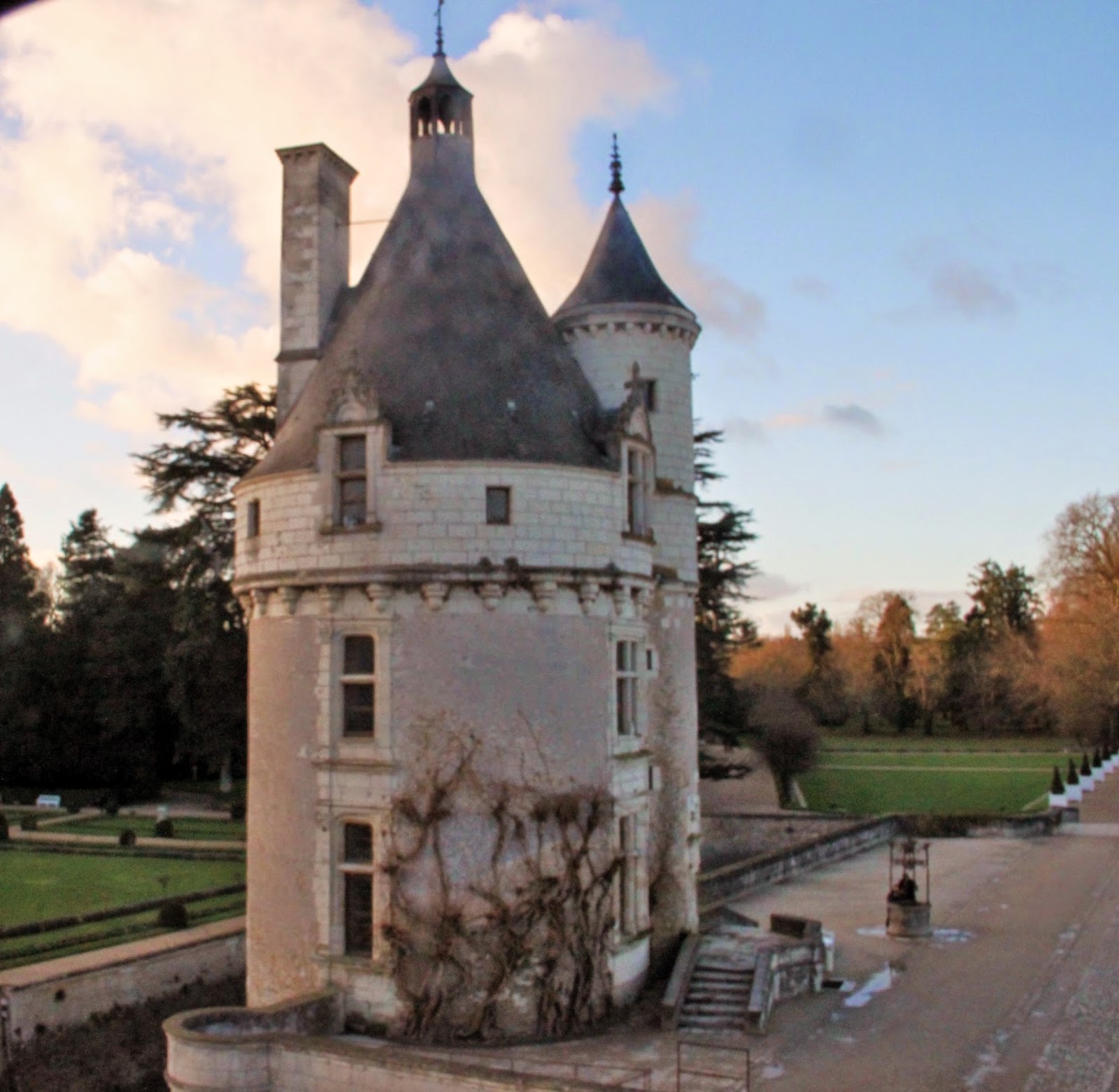 Looking out at the Tour des Marques, which is all that is left of the oldest buildings -- a castle and fortified mill, built about 1430. To the left you can just see a tiny bit of Catherine de Médicis garden. 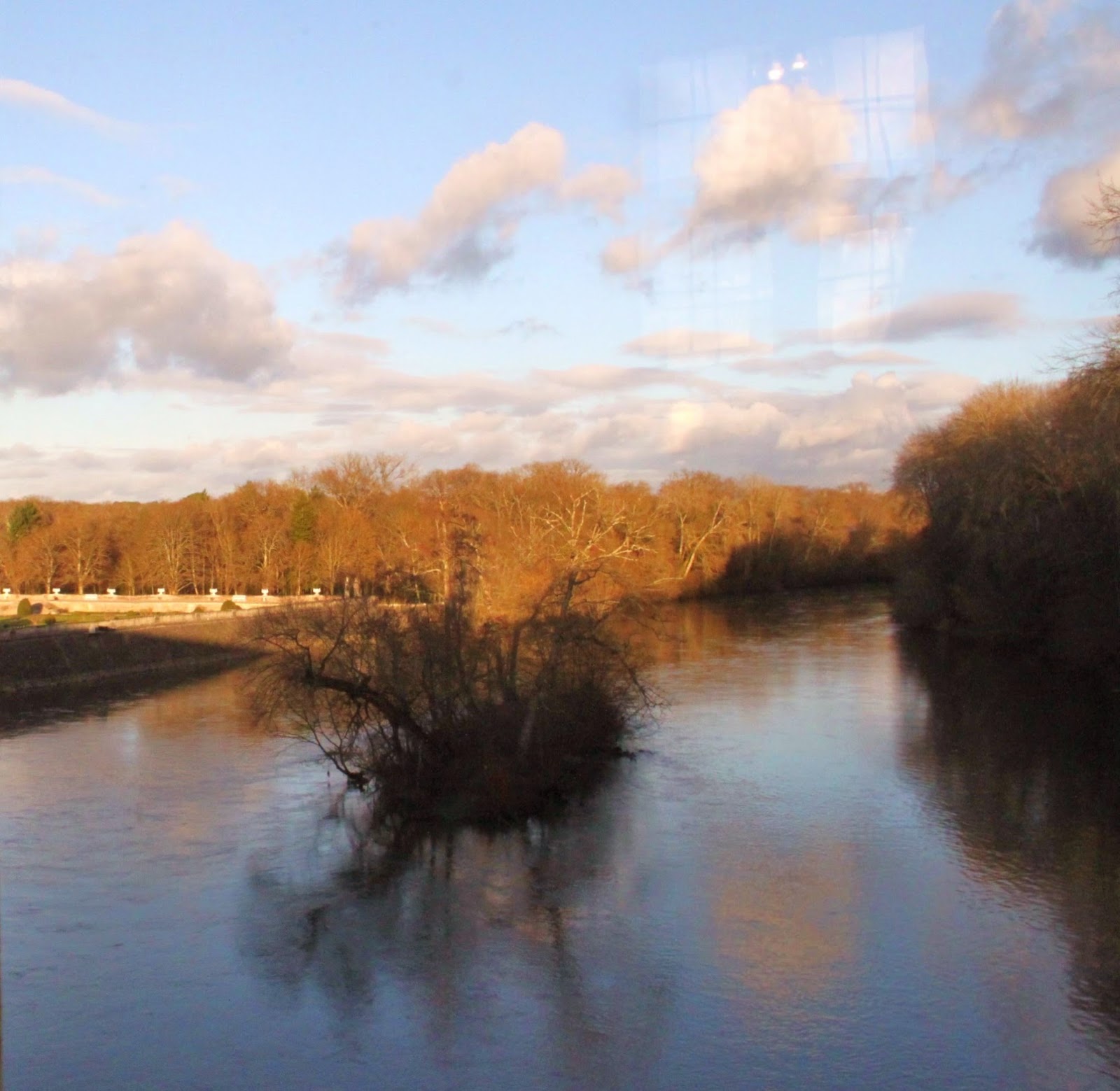 Looking upstream on the Cher from the second floor of the long gallery which stretches across the river. Catherine de Médicis threw a grand bash in the long gallery in 1577 in honor of her son Henri III. In the left hand corner you can just see a bit of Diane de Poitiers' garden. 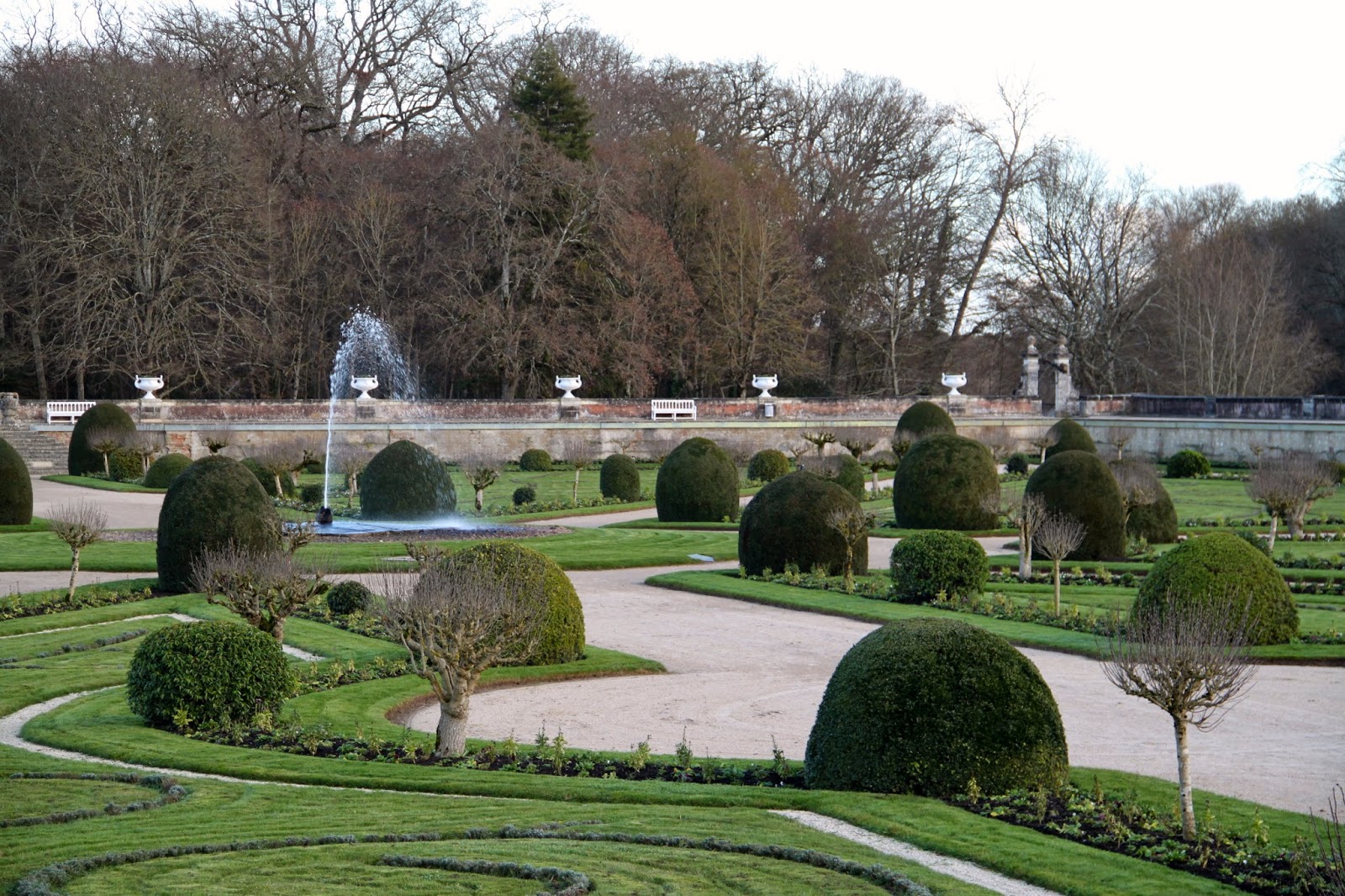 Diane de Poitiers' garden with the water jet fountain at the center. It is very formal rectangle dissected with sharply delineated paths which slice the space in  triangular beds. The paths converge at the water jet. 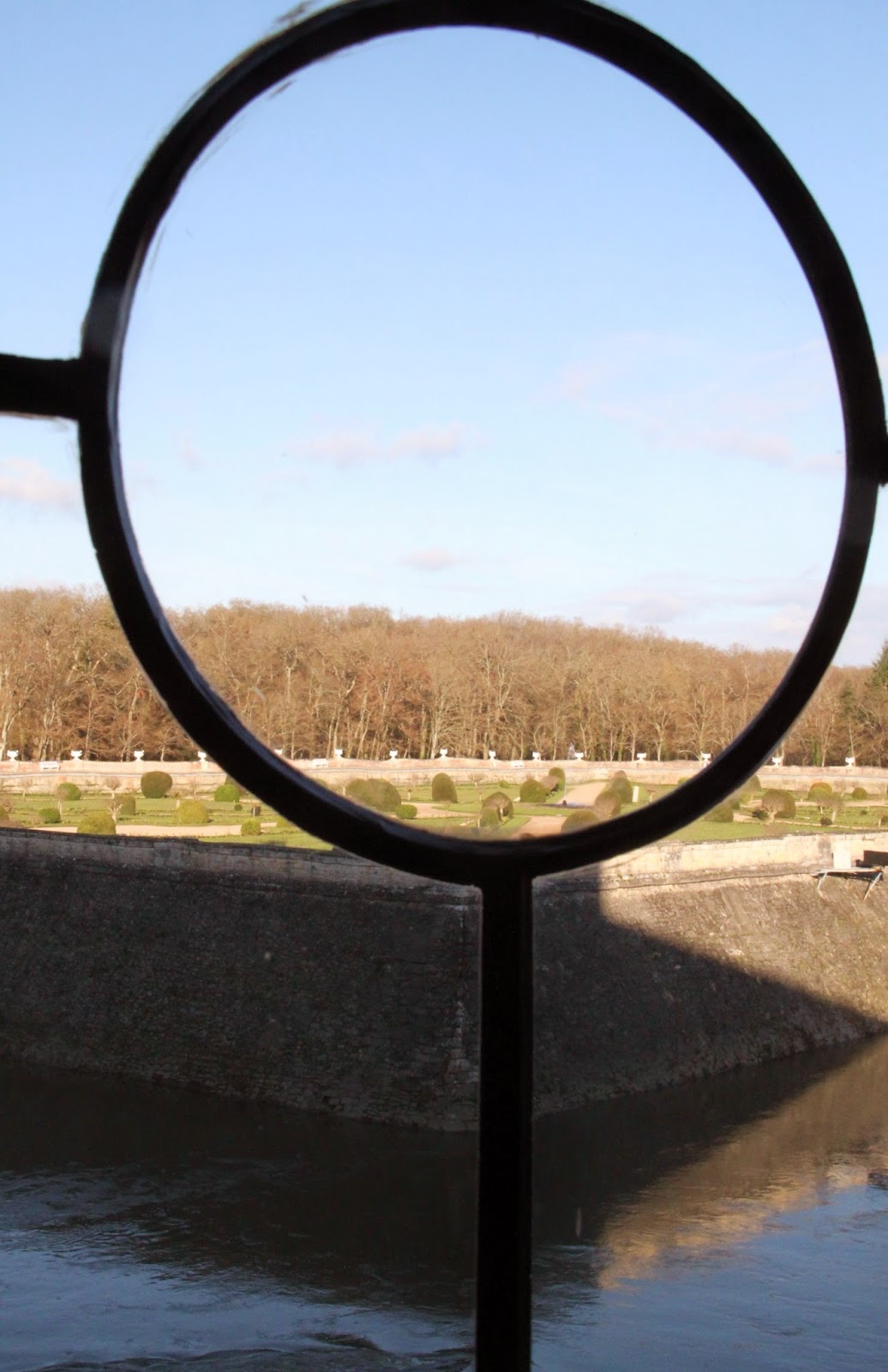 A classic winter blue sky. Looking out at Diane de Poitiers' garden from the ground floor library cabinet which leads off from Catherine de Médicis' study.

When, over Christmas, we visited the chateau of Chenonceau with Susan & Simon it was lovely and quiet and we were able to look around in a very leisurely fashion.

The kitchen and food preparation areas, as well as the servants' dining room are located in the cellars of the older building whose foundations, like that of the later gallery extension, are built in the river. The food preparation areas are on one side and the main kitchen with cooking ranges is in the other. There's a set of stairs which links the two areas -- rather like an internal version of a canal bridge; you walk up the inside of an arch span and then descend to the other side. Through the windows you can look out at the river Cher flowing underneath you. 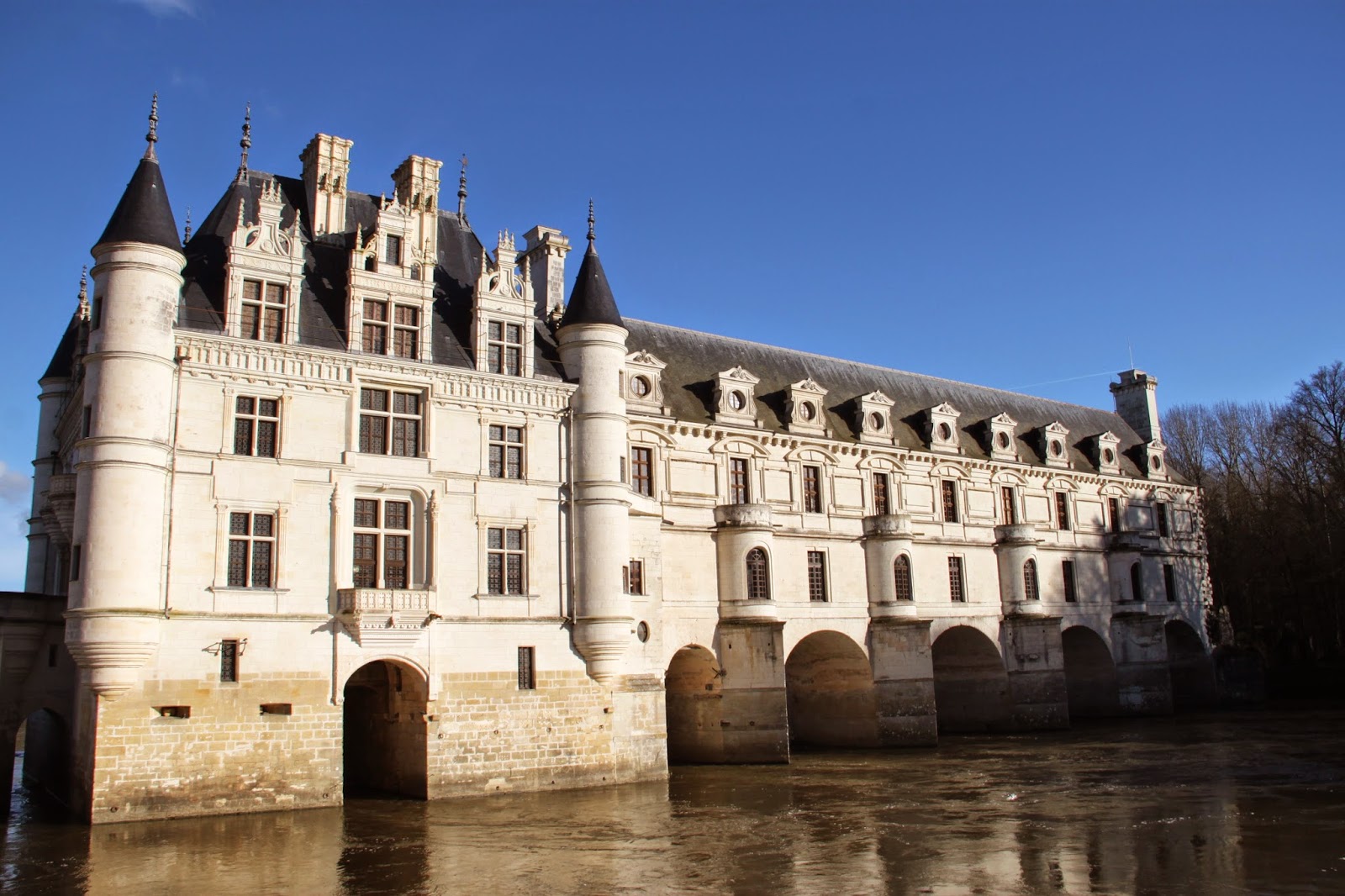 In the photo above - taken on Christmas Day -  you can see the central rounded arch underneath the older, square section of the chateau. The main kitchen area is on the left and the servants' dining hall and food preparation rooms are on the right.
While we were looking at the 19th century kitchen range and paraphernalia we came across two mystery items.
If you look closely at the first mystery object you'll see our reflections in the beautifully polished copper. It was sat on the main range. The bulbous addition to the pan is what puzzles us. Without it it would seem to be a fish pan, albeit a fairly deep one. The bulbous section isn't a handle -- there are two obvious ones for carrying the pan and it is sealed, there are no vents or apertures. As the pan is on display and there's a strict 'don't touch' policy we didn't lift the lid so we don't know what it looks like inside.
The second mystery object is obviously a useful Victorian labour-saving gadget of some type but we couldn't decide what for. It reminded me a little of a giant cigar cutter. Simon thought it was to grip something.  The two small 'ax' shapes in the center have blunt serrated edges.

So, despite some extensive speculation and discussion amongst the four of us, none of us have any real idea what these items are for. Do you?
Posted by Niall & Antoinette at 19:59 21 comments:

A good start to 2015 with none of the lowering grey skies we've had too much of recently, but a frosty day with sun and clear blue skies; so went out with the camera.

Looking west-north west from the edge of our property over Eric's field of colza to the other side of the Aigronne valley in the distance. 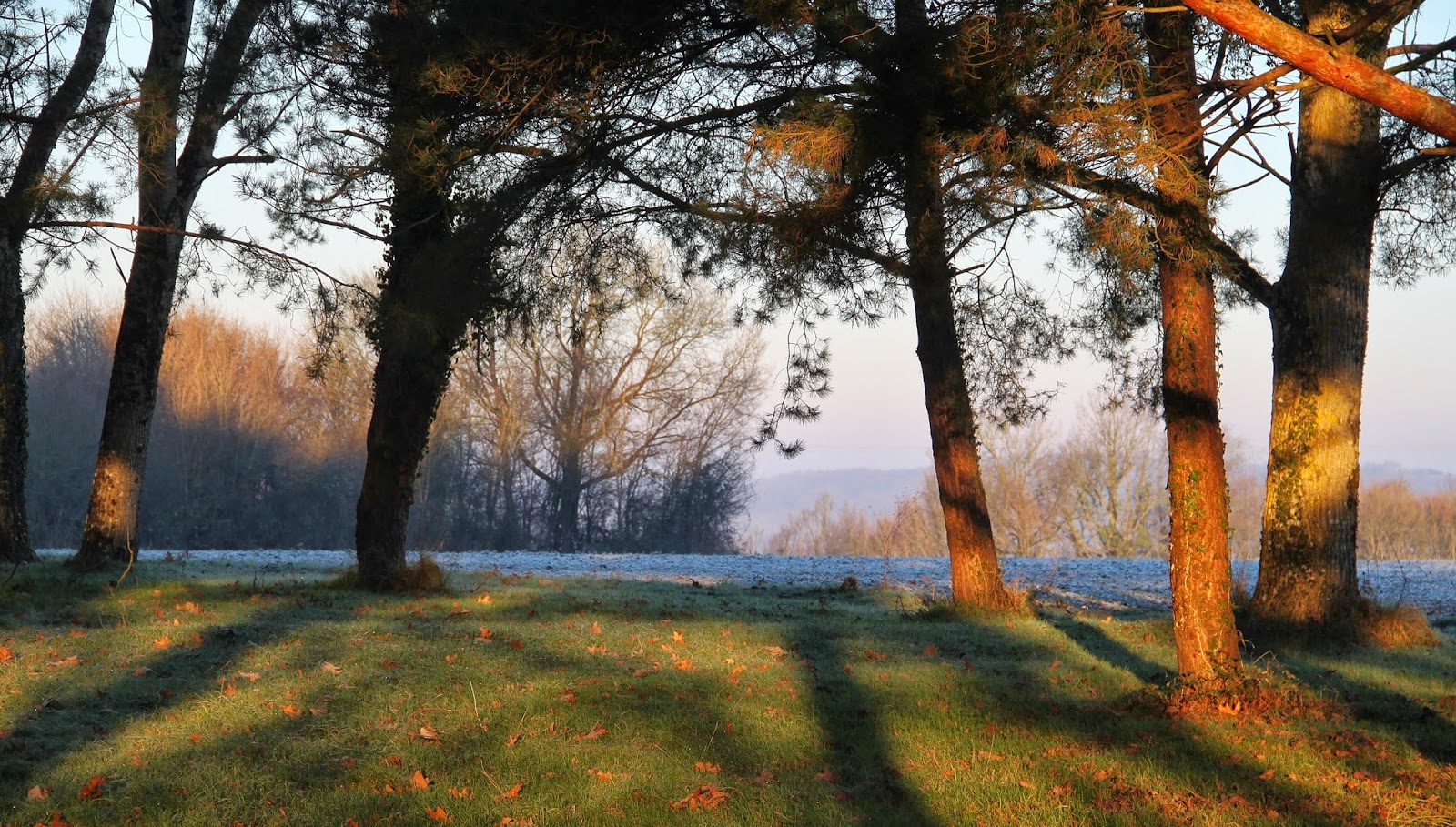 Again looking north-west. The low morning sun is casting long shadows and has already melted the frost under the trees.

Looking towards the south east. Deer often come up from the wooded gully and then cross our land, heading to the copse to the west of our house. 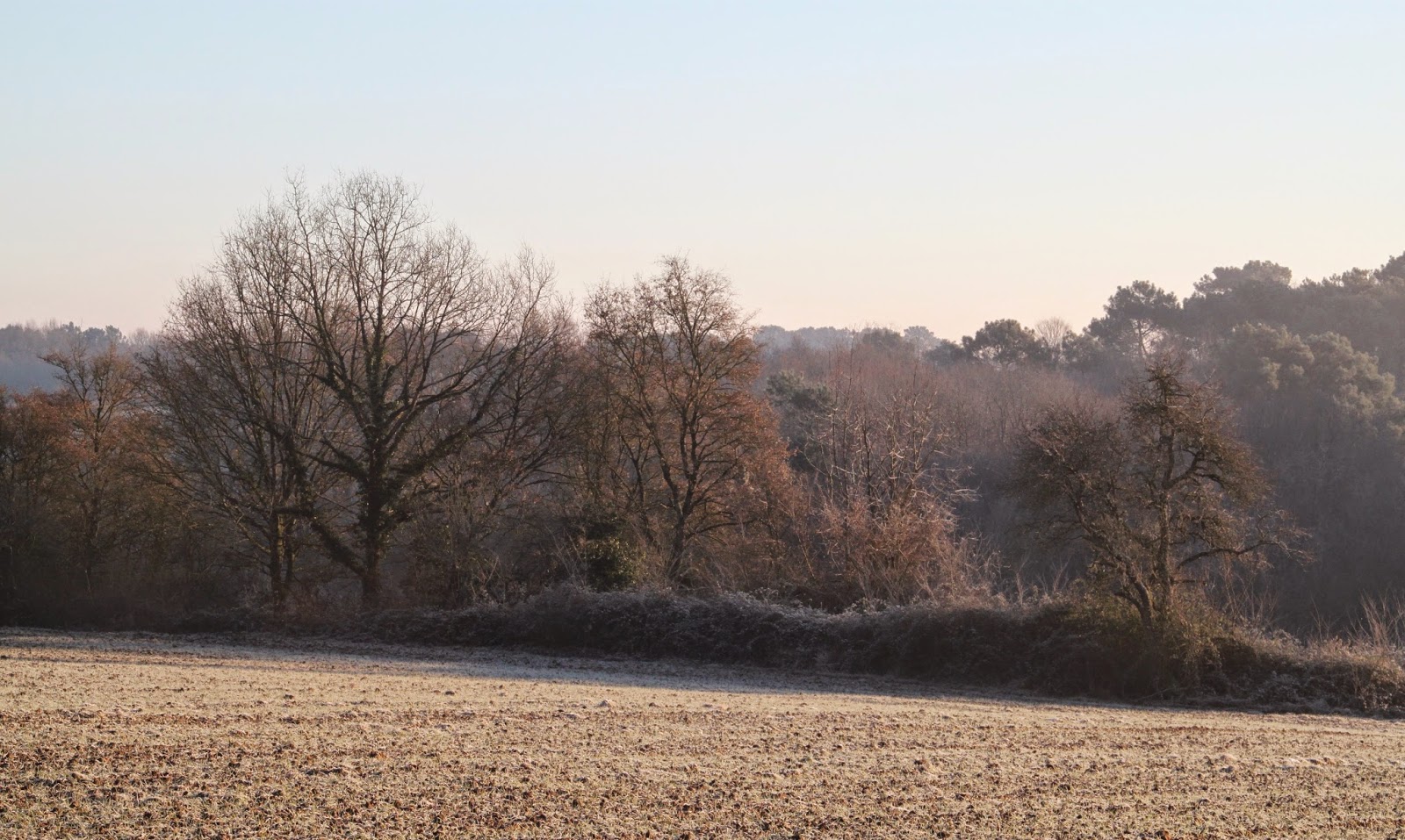 Looking east-north east along the same gully as in the photo above. In the forefront is a small strip of hedge which juts out. The field carries on down to the gully just behind it. 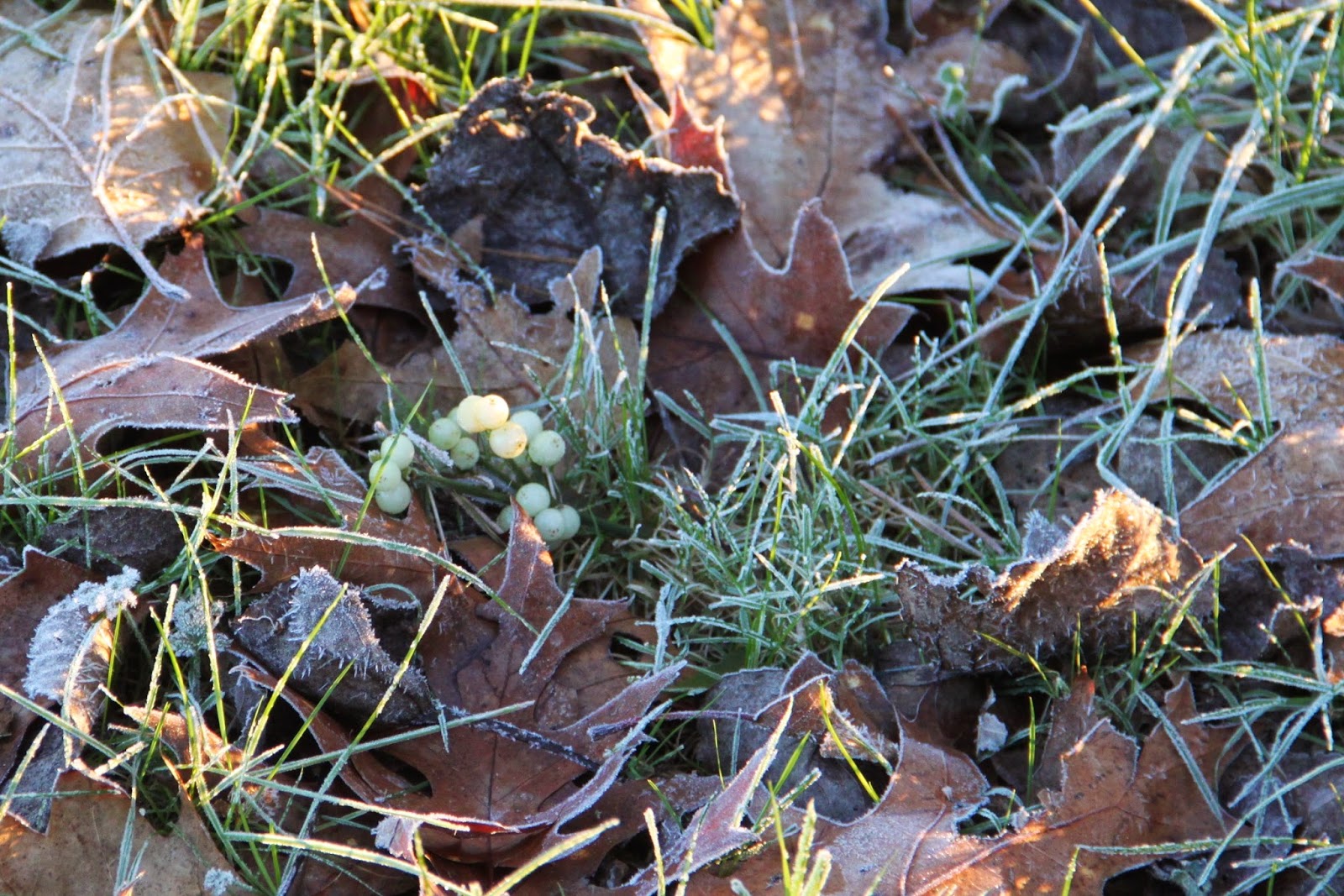 Mistletoe berries dropped from one of the poplars lying amongst the frosted grass and leaves.

Not long after that we cooked our New Year's Day brunch - croissants, chipolata sausages from our local farmer, bacon and soft scrambled eggs.  All washed down with fresh orange juice and a glass of sparkling Vouvray - aptly named Cuvée Antoinette. 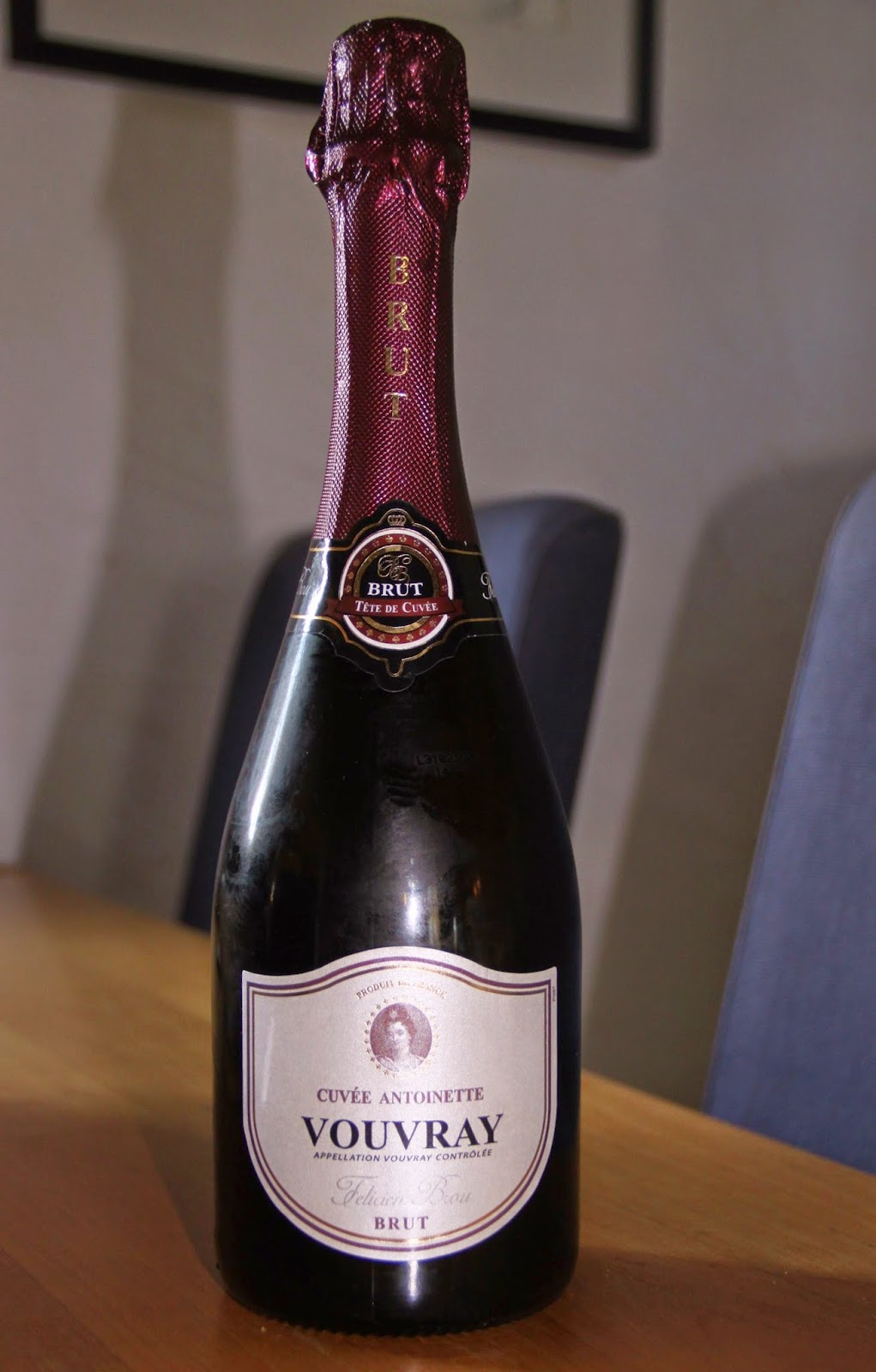