Preuilly-sur-Claise, about 8km away, is our nearest local town. It's the place we go to for the nearest ATM, bakery, chemist and other services. If we have run out of something and our own village shop has closed--it's only open in the mornings--we pop down to Preuilly. In short we regularly go there. It also has the remains of a lovely romanesque abbey. It was founded in 1001 by Effroy, Baron of Preuilly and his wife Beatrix d'Issoudun. Unfortunately lack of funds meant it was transferred in 1006 to the Abbot of Marmoutier who in turn gave it to the Abbot of Saint-Julien of Tours. Three years later, in 1009 the 1st building on the site was consecrated and monks were recruited to join the [Benedictine] monastery.
In 1025 the abbey seceeded from the Abbey of Saint-Julien and became autonomous. Records show the many subsequent donations it received transformed it into a prosperous foundation. The core of the existing building is thought to date from this early 12th century period.
In the 15th century the abbey was embroiled in a serious conflict with the Baron of Preuilly, Pierre Frotier. The monks were subjected to all manner of bullying and abuse by the Baron and his Scots guards [clan Duthie was not involved as far as Niall is aware!]. Responding after numerous complaints the king, Charles VII forced his vassel to make amends and undertake important restoration work on the abbey buildings.
The abbey was sacked by the Hugenots [protestants] in 1562. They destroyed the crypt and burnt the abbey foundation charter. By the time of the French Revolution in 1789 there were only 5 monks left and the monastery was closed. According to historical records the local population was very disappointed. Abbeys, such as Preuilly served not only a religious purpose but also offered education, hospitality to travellers and aid to the poor. The monastery buildings were sold off but the abbey church re-opened as the parish church in 1803.
The building has, over the centuries been restored, first in the 15th century but more visibly and extensively in the 19th. However, even though many of the capitals which decorate the stone columns are heavily restored or copies, enough originals remain.
If you walk down along the right hand [south] side of the church  you pass under a couple of flying buttresses and if you then take a sharp right you find --tucked away-- the remains of 2 arcades which formed part of the original cloister, complete with beautifully carved foliate capitals and polychrome painting. 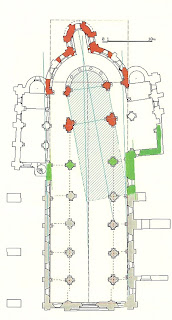 The whole building is off kilter as this plan identifying the different periods of construction and restoration shows [copyright G.Fleury 2009, Bulletin de la Société Archéologique de Touraine]
red= late 11th/ early 12th century
shaded light blue = probably original early 11th cent church location, columns and capitals were re-used in the ambulatory
green = sections which had to 'marry' the eastern half--already constructed with the western half.
grey = the final 4 sections of the nave which seem to be in the same romanesque style  1130 - 1150
colourless = 19th century restoration
Posted by Niall & Antoinette at 15:33

When we've been in Preuilly we always promise ourselves a visit, but haven't made it yet. Hopefully we will rectify this in the summer!

@Gaynor-- blind arcading is arches set against a blank wall. It's really common in romanesque architecture. There's a row of it on the facade above the entrance as well.

Shocking really that we haven't featured it before on the blog. After all it's on our doorstep!:-)

Well .... you learn something new every day! Thanks

Hello Niall and Antoinette:
We have so enjoyed this tour of the abbey at Preuilly. We love the simplicity of the architecture and the small details which give such an insight to life now long in the past.

We know very little of this particular region of France and so this has been a most interesting introduction.

We have found you quite by chance through Gaynor B and have read through previous posts with much delight. Your posts are beautifully presented and written with much thought and such care.

@Jane & Lance-- Thank you so much for your very kind words!! And a very warm welcome to Chez Charnizay :-) We're just really pleased when people enjoy the snippets we share about our corner of France.