It's hot today, our thermometer [north facing, never, ever gets sun] is reading 34C. However, by Wednesday the temperatures should have dropped back to the mid 20'sC.
As it was forecast we went out early this morning to water our fruit trees and repeat the same at our neighbour's. They live in Paris and won't be down until the end of July. Watering finished, we noticed that we have 3 quite different poppies.
Coquelicots especially like chalky soil and disturbed ground, which is why you see so many on recently cleared land and in grain fields if they haven't been too heavily treated. This one is just by where the chemin ends and our drive starts. Earlier in the year this was where the tons of sand and gravel for the fosse septique were piled before being used, so it certainly qualifies as disturbed ground. 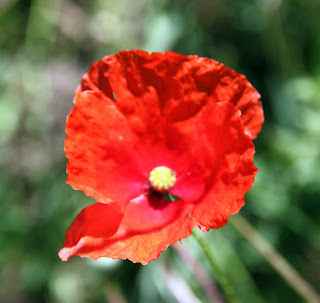 The coquelicot reminded us that next Friday will be the 95th anniversary of the 1st day of the Battle of the Somme which dragged on until November 1916. More of that another time; not on a sunny day like today.

A little further on is this extremely pretty pale pink frilly specimen. We suspect it is an escapee from the neighbours. Once the seed heads are ready I'll be collecting them. We quite fancy having these in front of the house. 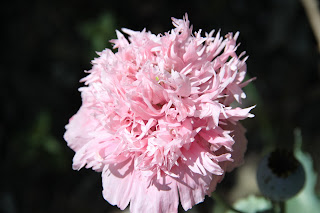 The third poppy is a US transplant. It came in the mix of New England wild flowers seed mix. It's a lovely almost translucent intense pink, but with not a frill in sight. 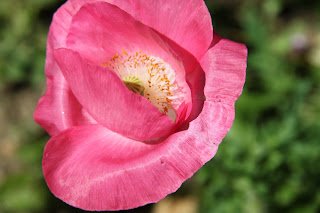 Beautiful. I haven't seen the second and third varieties before.

Well I suppose I may have seen the second, but I wouldn't have recognised it as a poppy.

I'm a poppy fan. That second frilly one is superb! Love it.

Hello Niall and Antoinette:
We love your Poppies and, indeed, like all varieties of them, single, double and in their rainbow of colours. The second one you show is particularly attractive and such a good idea to collect seed and sow it, although whether it will decide to grow where you put it is another matter entirely!

I love frilly flowers of any kind, especially tulips, peonies and now - poppies!! Lovely photos. Try to hang on to the nice weather for a couple more weeks for us, please !!!

@Craig--super isn't it? There a couple more flower heads on the plant so we'll be able to enjoy for a while.

@Jane & Lance--too true; poppies are a law unto themselves. We'll scatter the seed in front of the house and just wait and see where they deign to come up :-)

@Jean--We'll try :-) It is supposed to go higher tomorrow... I'm hoping the air-conditioning works at school...

Are you sure the second one is a poppy? It looks more like a wild carnation to me. Mind you, I'm not an expert :)! Martine

I love to see poppies growing wild. They evoke so many different emotions -- from the pure joy of their variety and gaiety and abundance, to the profound poignancy of their reminding us of all those lost in needless cruel wars. Lovely pictures and interesting post.

@Martine--it is honest! But it does a good impersonation! If you look closely you can just see a classic opium poppy style seed head in the bottom right corner of the pic.

@Broad--they're one of my favourites too, I just love the colours. Thanks.