Back in late October, on leaving Edinburgh, we headed for Chester to see an old university friend. We took the A702 via Biggar to link up with the M74. This road takes you through the more northerly end of the Scottish Borders, or 'reiver country'. It is stunning countryside and hopefully you can get an impression from the photographs below.

From about the late 13th to the early 17th century it was a pretty lawless place. Families raided on both sides of the border and as long as you didn't endanger family or alliances anything was acceptable. Due to their 'skills' border reivers were quite highly regarded as soldiers, although their allegiance could be suspect. Families would have relatives on both sides of the border and changing sides in conflicts between England and Scotland was [often] not an issue.

Sheep and cattle spent much of their time trotting backwards and forwards along the hills as they were rustled hither and thither. Houses were torched and it was frequently quite bloody. Along with the rustling, blackmail flourished as an enterprise and many became rich. Feuds between families, both across, as well as on the same side of the border, abounded. 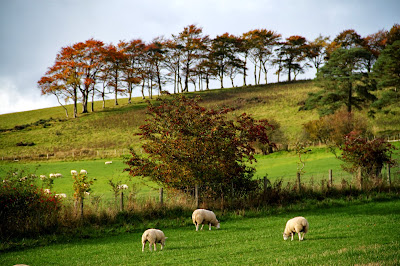 For the common folk this 'reiving' was a nightmare and they often constructed simple homes made from turf as they were so frequently destroyed that it made no sense to construct them from anything more durable. Richer families built 'bastle houses' or peel towers. Both were made of thick stone walls with a minimum of wood so they could withstand being torched [laying siege took too much time]. Livestock would be kept safe on the ground floor and the inhabitants would barricade themselves on the floor above. Rides [as raids were called] could vary greatly in size, sometimes the group was small, at other times it was huge with 1,000 or so taking part.

With all this raiding going on they did set up a framework for law and order.  There were Lords, or Wardens of the Marches [East, Middle & West] on both sides of the border tasked with keeping the peace, but as the very families who were Wardens were also from reiver clans or families the system varied in its efficacy. Peculiarly Border Laws were created to deal with the raiding. For example, under these laws a person who had been raided had the right to mount a counter-raid within six days, even across the border, to recover his goods. This was known as a 'Hot Trod'. It had to proceed with "hound and horne, hew and cry", so that it openly announced its purpose, to distinguish it from unlawful raids proceeding covertly.

I [Antoinette] first encountered border reiving in Dorothy Dunnett's six-part 'Lymond Chronicles' set in the late 1540s/1550s. Dunnett expertly blends historical accuracy, real historical characters with great fictional characters. Events sprawl across Europe from Scotland, England, France and Russia to Malta and Istanbul. I found them a brilliant read and have, from time to time, re-read all six books.
Posted by Niall & Antoinette at 12:21

That's really beautiful countryside, and sparsely populated, which is a plus as far as I am concerned.

Dorothy Dunnett! Now there's a woman who can plot on a large scale. The Lymond chronicles has been on my list for a while. I loved her Niccolo series and her Johnson Johnson mysteries.

I have her Niccolo series as well. :-)

I had the Lymond series, though not the others...but they must be back in Europe.
Do you know the George McDonald Frazer (he of Flashman) book on the borderers - Steel Bonnets, I think from memory.

Beautiful countryside all the way along the borders....but what a bloody hstory!

Looking at the wonderful, peaceful scenery now who could predict such a lawless and brutal past.
Great pics.

@Fly - yes I do, although, if I recall correctly, his story is set later.

oh yes definitely! - you could easily, at times, have described it as a civil war zone.

@Gaynor - all the placid sheep make it easy to forget how wild & lawless it was.

All fascinating stuff. And the photos are wonderful! We went up to Galloway earlier this year, which looks very similar.

Your photographs are just stunning. It is so thought-provoking to consider how peaceful so many parts of the world are now that were so wild in the past. I never cease to be amazed when travelling through the Somme area of France at how tranquil it now looks. And the battle grounds of the U.S. Civil War are the same. I've just ordered the first of the Lymond Chronicles for my Kindle -- my appetite is whetted! Many thanks...

@MorningAJ - Galloway has quite a bit of bloodthirsty history too.

Know what you mean about the Somme; it is only when you look at churches for example you realise how comparatively 'modern' they are due to the wholesale rebuilding.
As for Civil War battle fields, they may be peaceful now [and landscaped] but every one I've visited still caused the hairs on my neck to rise.

Let me know what you think about the Lymond Chronicals.

The Borders have the most wonderful countryside, whether we travel up the west coast or east coast route. After reading this I'm glad we don't need an armed escort to get through safely. :-) Thanks for reminding me about Dorothy Dunnett. I read her many years ago when I worked at the library, but must revisit her.

@Perpetua - Beautiful it is!
Even the armed escort would have been suspect at times!

The photos really are gorgeous. Such beautiful landscapes makes you wonder why so many people left the British Isles to move to untamed North America.

@Ken - thanks! I was really pleased how they turned out.