Quite close to Tours, just to the north-east, lies the commune of Parçay-Meslay, a mix of wine producers and Tours commuters. Earlier this month we'd been up to Vouvray to pick up some wine for Christmas. Along the road which leads from Rochecorbon to Vouvray there is a sign pointing the way to the "Grange de Meslay", which we'd noticed on previous visits. This time we decided that, having bought our wine, we'd go and have a look. The weather was beautiful with clear blue skies so good, we hoped, for some lovely photographs.

This is what we found: 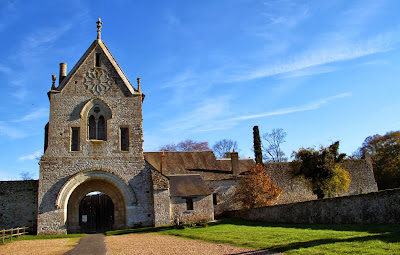 A beautiful 13th century gatehouse which is the entrance to what was once a priory complex originally belonging to the Abbey of Marmoutier [Tours].

The scale is huge -- originally the walls encircled a complex 2 hectares in size [about 5 acres]. It was the heart of a large agricultural estate as well as the place where tithes and 'terrage' [dues paid in kind] were brought to the monks. According to the Marmoutier Abbey chronicles the barn, portico, dovecote and walls were built between 1220 and 1227. However, there already had been a priory on the site from the 11th century. 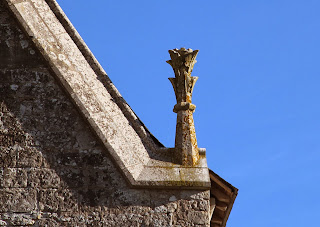 The tithe barn as it stands today is a 15th century re-build. It was burnt down by Scottish soldiers in September 1422 according to the Marmoutier chronicles. These Scots formed a major contingent of the Dauphin Charles' [future Charles VII] regular army and, poorly paid, they took to pillaging on their way back from a military engagement in the north. Ten years later, once Charles had regained the throne [with some help from Joan of Arc] it was re-built.

We have yet to see the tithe barn. The complex, still in private hands, is closed to the public out of season. From Easter to the end of October you can visit it at weekends [afternoons only]. If the barn and rest of the complex is anything as good as the gatehouse it will be superb and we're looking forward to seeing it! 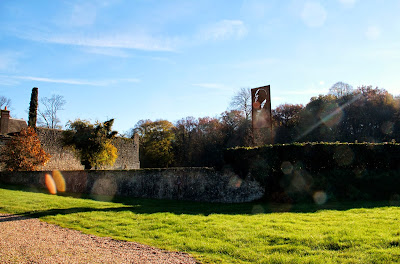 To the left of the gatehouse, mounted on the wall was a silhouette portrait made of metal.
Up close it looks rather like Marlon Brando don't you think? 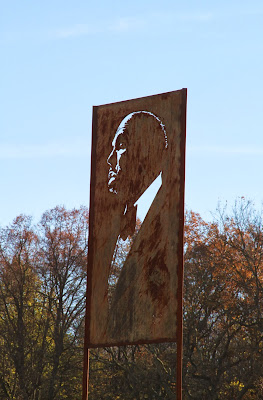 It is, however, a portrait of Sviatoslav Richter, a 20th century concert pianist [1915-97] who founded an annual music festival at Meslay. The festival, which will celebrate its 50th anniversary next year is held every June. You can check out the 2014 program here.
Posted by Niall & Antoinette at 13:00

We went to the music festival years ago...and the interior of the barn is well worth visiting. We didn't see the rest of the complex though.

@Fly - no indeed! According to the outraged monks the grange was full of wheat, wine and hay -- not something they'd pass over!

What a wonderfully austere and impressive group of buildings, well worth at least one return visit. I can't imagine what it must be like actually to own something so marvellous.

Have a great festive season N&A from Leon and Sue.
We've enjoyed reading your posts during 2013, have a great 2014.

@Perpetua - the minute we saw it we thought "The Godfather" and then spent some time puzzling over why the image was there! [we didn't know about the music festival until we got home and did some finding out]