So what do you do on a rainy Sunday? If you live in the Touraine one of the options is to go and buy some wine! We wanted to get some as a present for a friend and something a little special for ourselves--it is our wedding anniversary later this month.
We visited Vouvray's Vallée Coquette back in 1991 and, having bought some wine for Antoinette's father (a bit of a wine buff), had lunch at a troglodyte restaurant which we literally stumbled upon as we drove further up the valley. 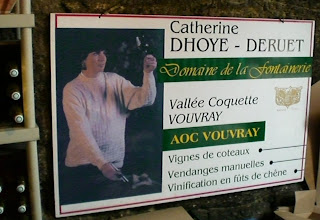 Last October we went back for the 1st time. We managed to re-find the restaurant and having done a little bit of homework in the Guide Hachette stopped at a propriataire-recoltante we liked the sound of.
As we really enjoyed the wine we bought last fall we went back to 'Domaine de la Fontainerie' to buy some more yesterday.
It was nice to meet Madame Dhoye, the owner/producer, again and we spent a little time tasting various of her Vouvray tranquille sec and learning a bit more about her wines. All her grapes are harvested by hand and she told us that although the 2010 vendange was very small she expected it to produce good  sec wines but not much moelleux [sweet]. 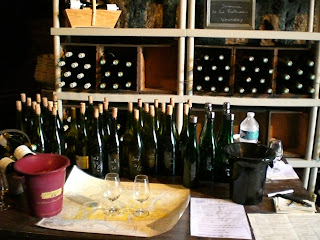 In the end we came away with 2009 tranquille sec as well as some 2007 Coteau les Brulés and a couple of bottles of pétillant millésimé 2007 brut for our anniversary. We both prefer the pétillant, which has a softer fizz; to the méthode tradionnelle. Not all Vouvray producers make the pétillant which was one of the reasons we chose to try her wines last October.
And no we didn't taste all the bottles on the table in the photo above!! Just some of them.
Posted by Niall & Antoinette at 21:50

Winetasting trips are one of the great joys of this part of France. We will seek this producer out on your recommendation.

Wine tasting/buying is one of our "treats" and it is nice to get something a little more special now and then. Hope you like her wines.

I love wine tasting too, but as a Libran, find it hard to decide which to buy.
It doesn't help that Tim doesn't drink wine!!!