We've been having a run of warmish and sunny weather and it feels like every single plant has exploded into life at once.

Our daffs are finished, the tulips are out and I've seen bearded irises in full flower in Tours; although ours are yet to come out. Cherry and pear trees are covered in snow white blossom. The crab apple next to the building where I mainly teach in Tours is in full flower and covered with bees. Our ornamental cherry is just opening its candy pink flowers and over this weekend we'll have a look and see if we can find some early purple orchids. The colza, or rape seed field, are bright acid yellow.

Earlier this week we took Tim & Pauline's lift[giant jack] which raises a ride-on mower back to them -- they'd kindly lent it to us so we could fix a front tire. This gave us an opportunity to also go and photograph the snake's-head fritillaries which grow in a ditch not too far away from them.

These particular snake's-head fritillaries are found in a shallow roadside ditch next to a flood meadow. They are exquisite with their purple-red chequered flowers and grow only in a very specific habitat: hay meadows in lowland flood plains. Before moving here, we'd only ever seen them in photographs -- they are rare because of this habitat. They need natural, i.e. unimproved [untreated], flood plain meadows, a type of meadow which is in heavy decline. We are lucky to have them!

Last year the snake's-head fritillaries were just beyond their best towards the end of April but this year, after the very mild winter, they flowered earlier and indeed on Tuesday, quite a few were clearly beyond their best. Nevertheless there were still some to photograph. 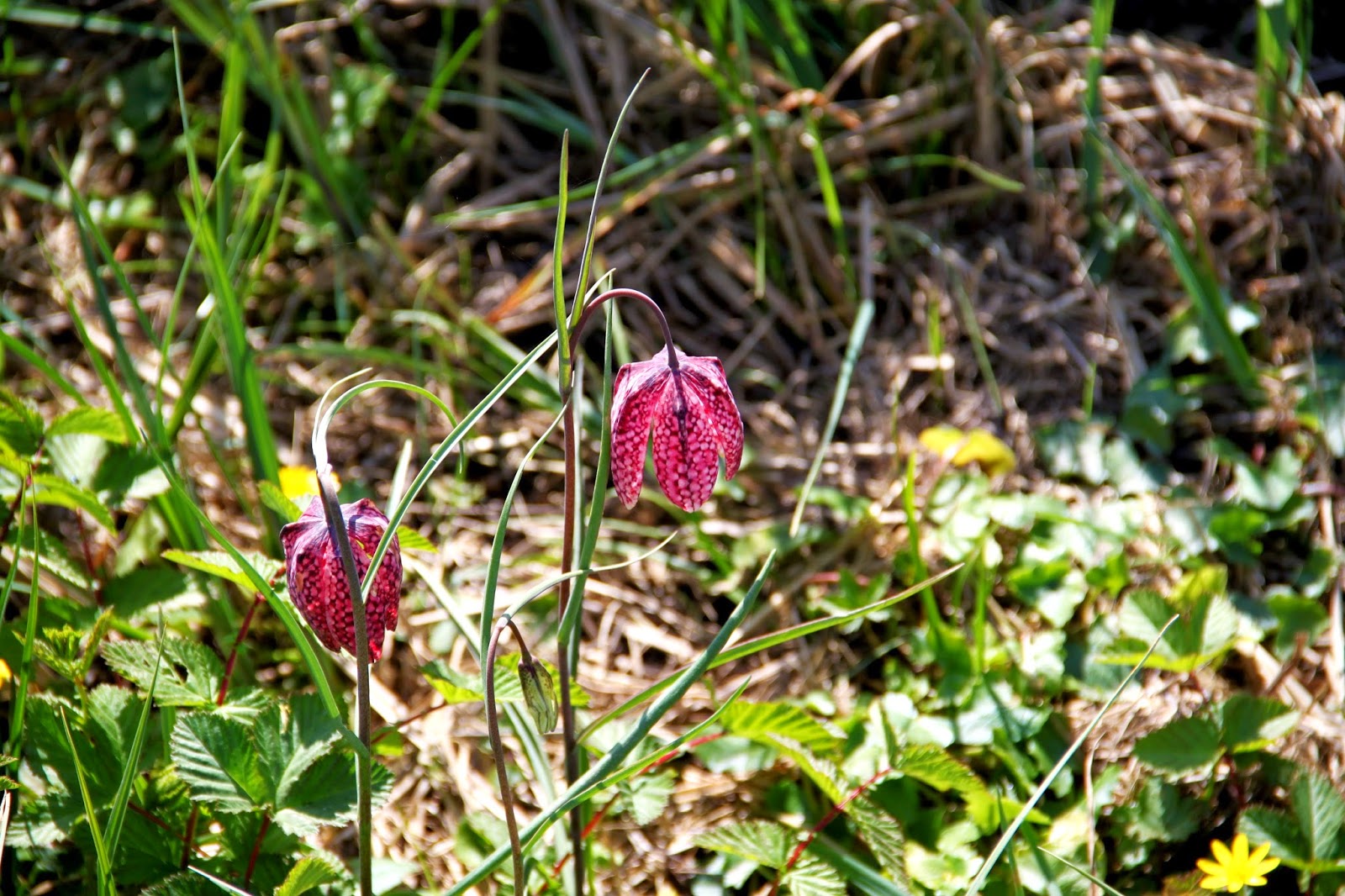 We also found the chappie in the photograph below clinging on to our front door key last week. It was very determined to hang on. We know it's a moth, but wondered if any of our readers who know much more about these things could give us any further information. The wings seemed to be concertina-ed so we wondered if it was a newly emerged individual busy pumping out its wings. 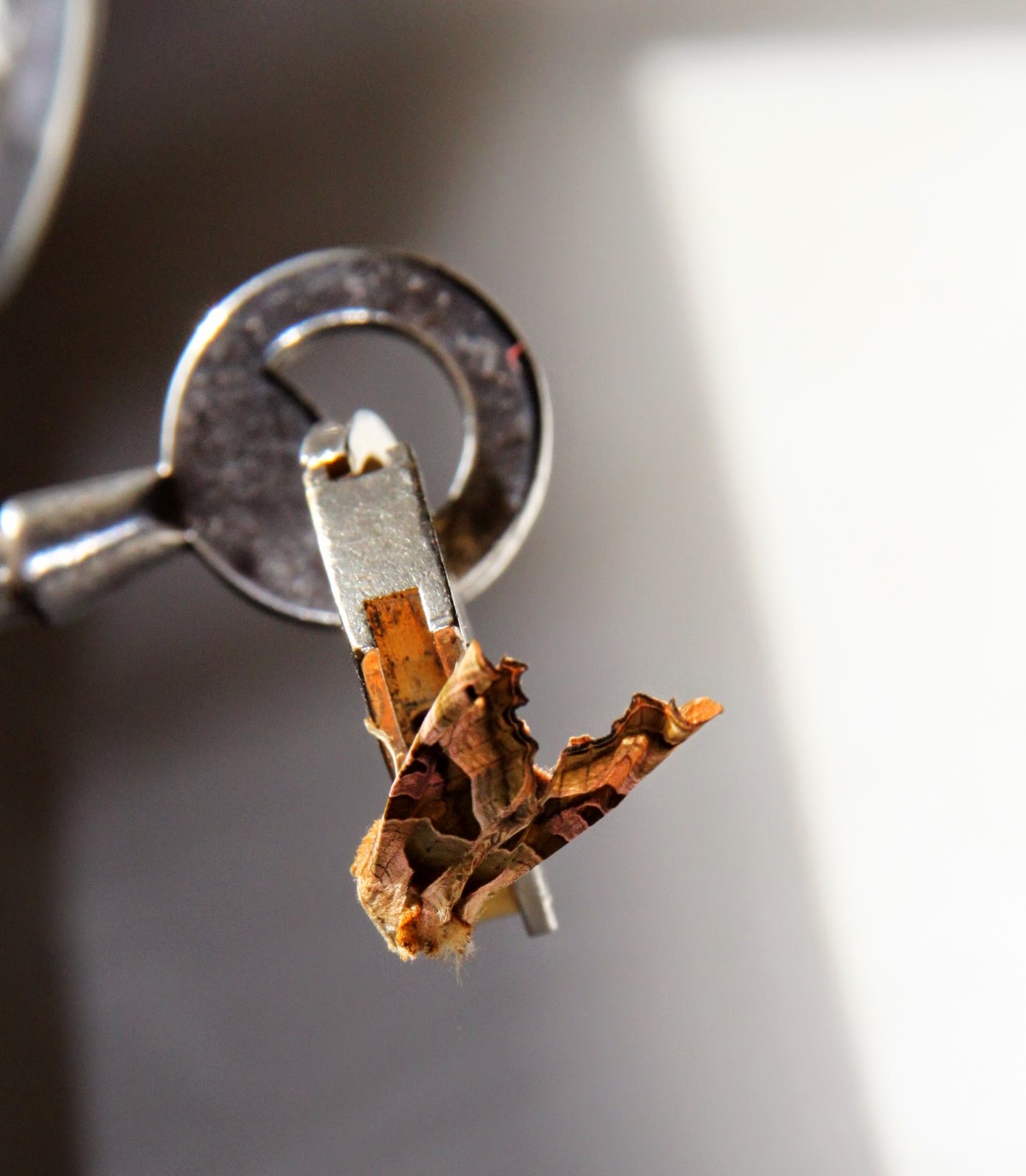 Finally, speaking of fauna, we thought readers might enjoy this photo of Tinka "wearing" Niall's jeans! :-) 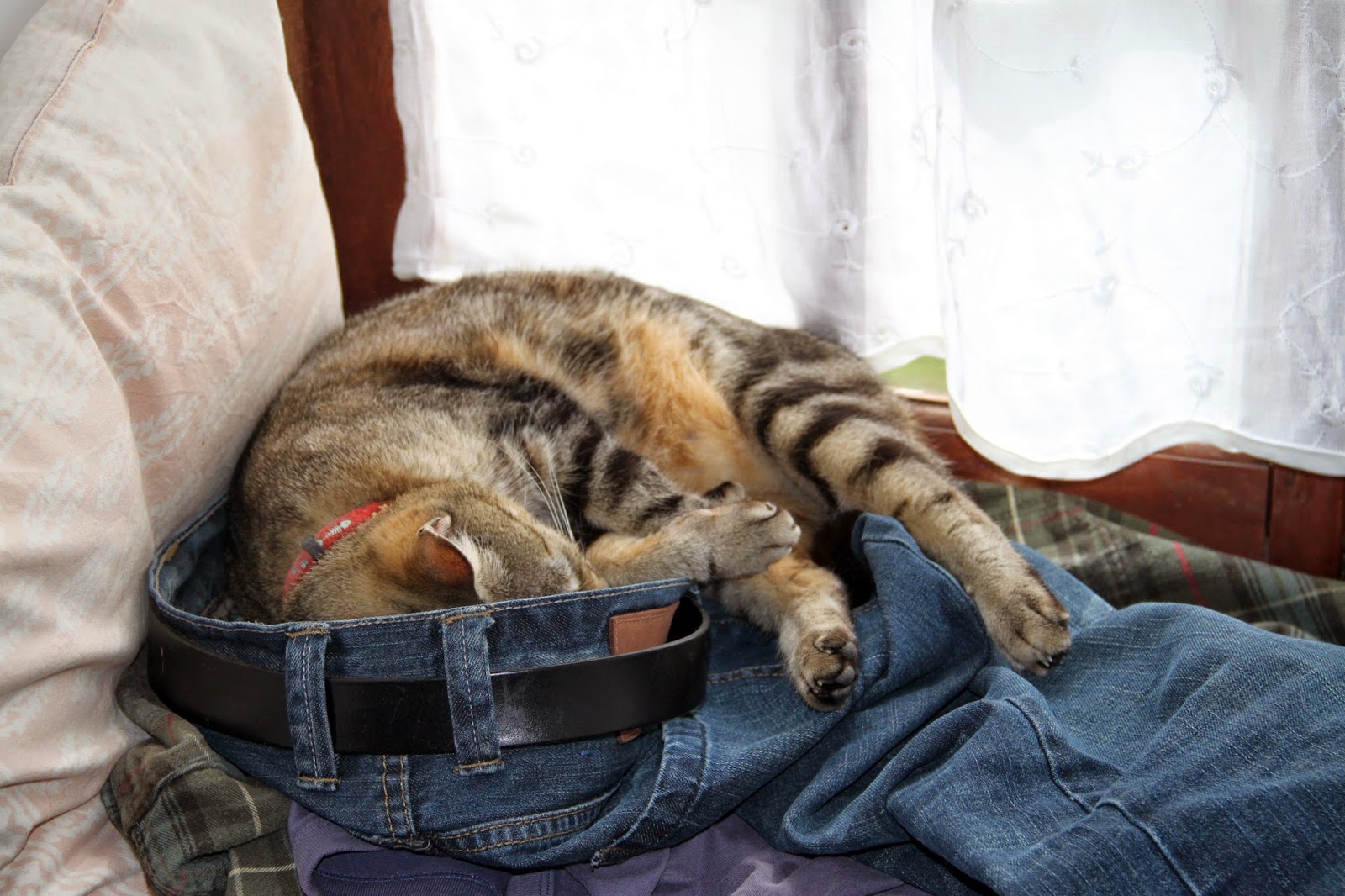 Your moth is the delightful Angle Shades Phlogophora meticulosa. They are quite common and come in greeny camouflage or red-brown camouflage. The pattern and the wrinkled wings make them look like a dead leaf.

The fritillaries are beautiful. I'd like to establish them here, pheasants permitting, we certainly have the conditions.

We're envious that you can see what we can't...yet!
Hope the blossom is still around when Easter finally comes round. It's so late this year.

Tom has sent some wonderful pics of the cherry blossom in Japan. Hopefully we'll see it for ourselves one day.

Well certainly look out for the fritillaries. So delicate and beautiful.

Our wisteria is now out and the lilac opposite is about to burst into bloom. We saw frillaries near Saumur a couple of weeks ago - the first time for me.

@Susan - thanks we thought you might well be able to supply the answer. :-) It's great camouflage [and pretty]. Are they nocturnal or is it a day time moth?

@Rusty Duck - they'd be worth a bit of pheasant proofing!

@Gaynor - not long to go though :-) You might just catch the tail end of the blossom.
Re fritillaries; I'm sure Tim & Pauline know much more about them but I do know there are various sites in Wiltshire and Oxford where there protected meadows which are carpeted with them; all carefully managed by relevant trusts.

@Aussie in France - our lilac is getting close to flowering as well.

They can be seen in profusion in Magdalen College meadow, Oxford. Including white ones. I understand they count as a naturalised species in UK. We had one (one!) on our land when we bought the place, but it got hit when Richard our neighbour had the millstream dredged.

We actually had three patches....
and it was the rodents that got two patches!!
And the frits in the ditch are now almost completely over.

@Pauline - pretty sure that's what I saw a photograph of -- Magdalen College meadow.

@Tim - not surprised. Our ornamental cherry is in full flower and last year it was at the same stage in early May. Everything seems to be happening at once due to the mild weather.

Spring seems to have come at speed after its long awaited arrival.....
Lovely photographs!

Here the rainy season has started a bit earlier than usual....much to my relief as the pasture was drying up and we have been cutting cane and camaroon like mad things to keep the cattle happy...

Gorgeous photos and I envy you the lovely fritillaries. How special to have a patch not far away. Up here in the far north the daffs and narcissi are in full bloom as is the flowering currant, but not a trace yet of tulips or fruit blossom. It's still not very warm here.

What is it about cats and the places they sleep? :-)

@fly - at speed and then some!
Good to hear you're getting some rain for your pastures. Our sunny weather is forecast to continue until next Wednesday/Thursday. Last year we were still huddled indoors with the wood burner on at this time.

BTW tried to comment on your blog but Blogger wouldn't let me. :-( Need to figure out what glitch it is this time....

That's weird, as I have comments set to allow anyone, including anonymous users, to comment and not even any word verification to get in the way. Sigh....