Not far from Chinon, tucked away up a small valley to the north of modern day Cravant,  lies the vieux-bourg complete with its ancient church. The nave is formed by the original 9th century Carolingian church. It underwent two extensions. The first took place in the 12th century when the apse at the east end of the original church was opened up and the building was extended to create an apsidal choir and then secondly in the 15th century a south transept chapel was added.
The building is a lucky survivor. The village of Cravant moved to its current location in 1863 and built itself a new church. Hence its old church, dedicated to St Léger, became redundant. It escaped demolition and was put up for sale in 1865 when it was bought by the 'Societé Archéologique de France'. It is now owned by the Association 'Amis du Vieux Cravant'.
We visited the church in September during the 'journées du patrimoine' on a day when the rain was teeming down. There wasn't a soul in sight, but the door stood open so we made a dash for the entrance and had a look round. On that day entry was free; normally there is a simple "turnstile/pay as you enter" system in operation.
Inside you can see that the Association has a continual struggle to keep damp and other ravages of time at bay. Nevertheless, there are some lovely things to see.
The stars of the show are the two Merovingian pillars [Merovingian period: mid 5th - 8th century] which frame the entrance to the choir and pre-date the earliest part of the church. They are carved with lovely knotwork patterns. The first mention of these two pillars is in the 15th century when a porch was built which ran the length of the exterior of the south side and incorporated these two pillars as the supports to frame the entrance. It was removed at the end of the 19th century.
In the 15th century lady chapel [south transept] is a partial wall painting, somewhat naive in style, depicting figures venerating the Virgin Mary under a sky of eight-pointed stars.
The Carolingian nave houses a collection of sarcophagi from around the Touraine region, other odd items and a cabinet with some lovely bits and bobs of sculpture. 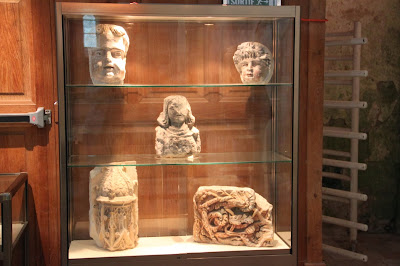 Sadly no photos of the exterior as it was raining far too heavily to get the camera out. An interesting way to spend time on a very "driech" afternoon.
Posted by Niall & Antoinette at 15:00

We have a similar ancient church nearby, and I never cease to be amazed at how much effort must have been put into building it. And also for the upkeep of it now. I did play the piano to accompany the choir associated with the church but have had to stop due to time constraints. Later on I shall get back into my music and perhaps pick up with that choir again. It is nice to put something back into the community, particularly in regards to keeping the history of the region alive.

@Vera - how lovely they have a choir. Hopefully you can get back to the music soon.

Not sure if they use the decommissioned church at Cravant vieux-bourg for concerts but it would be a super venue.

How lovely that it's still standing for all to see, marvel and enjoy.
All that history, still there to fascinate those that are interested. Thankfully.

I'm so glad to read - and see - more on the church at Cravant.
Those pillars are special...makes you wonder what preceded the Carolingian church.

@Jean - it's well worth a visit on one of your forays to Chinon.

@Fly - So do we. So far we haven't been able to find out any more. There's no mention of a building prior to the Carolingian church.

St Léger however, was Merovingian [the church was dedicated to him]. According to what we found out he was murdered in 678 on the orders of Ébroin, Mayor of the royal palace of Neustrie [a very nasty piece of work].
The murder took place in Picardie but St Léger's body was then transported to Poitiers to be buried in the Monastery of Saint-Maixent where he had been abbot.

I love the stark simplicity of very early church architecture and can almost feel the sense of immense age which emanates from every stone of a building like this. The knotwork on the Merovingian pillars could have come from the ancient Welsh crosses which still exist in a very few places here.

@Perpetua - they are very similar aren't they. I love knotwork patterns.

For us they raise lots of great, but unanswerable questions such as:
Where did they originally stand?
Were they always a pair?
Or were they individual marker stones[of the same pattern] which ended up together?