We've a Blogger friend who is partial to walnuts, but never gets to collect the nuts off her own tree at their little house. As we have quite a few trees and are usually innundated with  nuts we offered to get a box to her. We'll post it when we're over in the UK on a family visit later this month. So that's the plan.... though the box might be slightly smaller than at first anticipated.
This year the squirrels have been more assiduous in eating the ripe nuts which have, so far, dropped leaving us with a wee fight on our hands. The good news however, is they are steering clear of the big tree by the kitchen door which still has plenty of nuts on it.

We've just started collecting and this morning Niall had a look for the nuts that have dropped. Naturally Katinka decided to help. 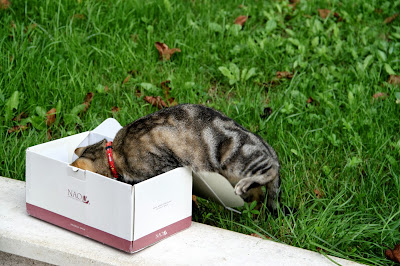 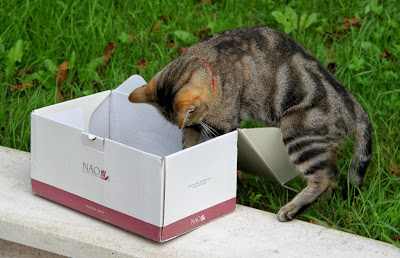 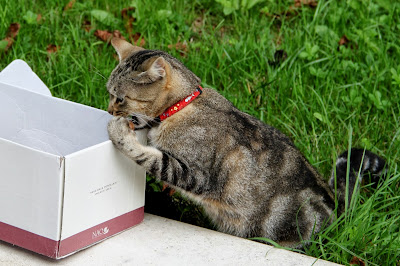 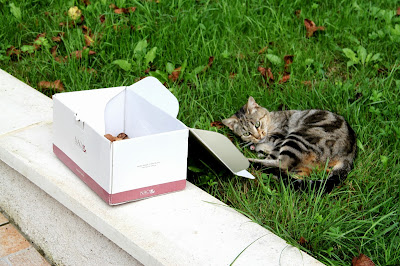 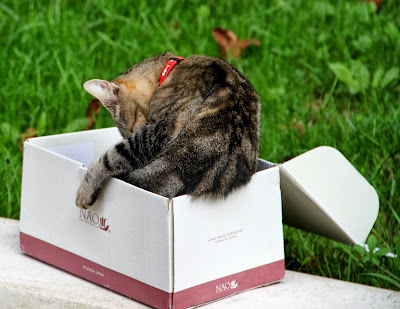 Quick wash in the box to finish!

She then settled on the layer of nuts already in the box for a nap..... sigh!
Posted by Niall & Antoinette at 12:01

But isn't that why you put the box just there...

I've read somewhere that cats can't resist exploring empty boxes and squeezing themselves into even the smallest ones. So Katinka is just following her instinct. Although I must admit that taking a nap on a bumpy walnut 'matrass' isn't my personal idea of a comfortable bed :) Martine

How funny! Katinka is so determined and then lying down on top of what's left to make sure they don't disappear! Wonder what makes her think they might! ;-) We never seem to be around when our walnut trees drop and this year the crop looked particularly abundant.

@ Martine - absolutely! Niall's sister's cats, though now very senior, will still squirm their way into boxes however small :-)
Nor ours!

@Broad - It was :-) she fished out 3 batted them around for a while and the popped herself into the box.

Awww, bless. :-) What is it with cats and boxes? Sorry you're having to fight the squirrels to garner some of the crop.

We don't have a walnut tree at present, though a friend has given me a seedling which may produce nuts by the time I'm 90 - if I'm lucky. : -)

Our sheep and goats are the do-ers in of our walnut harvest because the nuts fall into their grazing space!

Our walnuts are nowhere near ripe yet, but when they ae, we'll collect them in the laundry basket (Baron's present choice of bed)! P.

@Pauline - our are just starting on the tree by the kitchen, but the major drop is still to come. One of the trees further out is farther along but the squirrels get there 1st! :-)