Castles in the air

Over the summer the Château de Fougères-sur-Bièvre, which we wrote about in our last post, is hosting a small exhibition about imaginary castles in literature, art and popular culture. 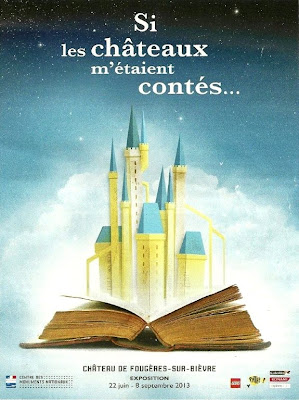 Entitled "Si les chateaux m'étaient contés" you'll find it meanders along the route of your visit, beginning in the salle d'honneur. According to the leaflet [our translation]: "since the Middle Ages castles have been the stage for legends, fantastical stories or unsettling tales filled with knights, magicians, princesses and fairies".
The exhibition is split into three themes: castles of legend, castles of mystery and fairy-tale castles. First up is a small slide show of mediaeval illuminations showing some wonderful 15th century castles depicted in contemporary manuscripts.
There are models and toys made of materials ranging from paper to plastic and everything inbetween as well as vintage movie posters, comics and more modern video clips. Some of the early toy castles are from the 1920's and quite rare. Interspersed are interpretations of each of the themes by young artists and almost inevitably there's also a model of Harry Potter's school Hogwarts.
The exhibition is quite fun and you can take as little or as much notice of it as you like while you visit the castle. Further along you'll also find a small collection of scale models of mediaeval war engines. These give a good idea of what the mediaeval army leader could call upon if he was settled in for a siege.
However, you might find yourself distracted by the superb structural woodwork which supports the conical tower and loggia roofs.

That's sealed it - we must go.Not just for princesses!

That exhibition looks so interesting and set up in the perfect setting. Did you go up to the bell tower to see the clock's mechanism when you were at Fougères castle? You should get out of there before the bell strikes the hour, though. It can be quite deafening :) Martine

That does look very interesting. The sand castle with illumination (?) is wonderful.
And I love the roof!

@Martine - yes we did. Niall spent longer up there than I did and only made it out just in time :-)

@Craig - the level of detail on the sandcastle was quite impressive, Unfortunately it was roped off because of the projector in front so you couldn't get very close.

We loved this château when we visited it last year.
Your photos are marvellous and it's an immensely photogenic place.
Thanks for reminding me what a fun day we had - maybe we should go again!

@Jean - Glad you loved it too :-) Agreed! I think it would be hard for anyone to take an ugly or uninteresting photo.

@Leon - dangerous things those lists, they grow while your back is turned! :-)