A little while back, friends Susan and Simon who write the blog Days on the Claise ran into Marc Dimanche, an acquitance of theirs. A devoted member of the Preuilly archaeological society, he offered them the opportunity to visit the Chapelle de tous les Saints [All Saints' Chapel] which is located on the left as one drives into Preuilly-sur-Claise from the direction of Le Grand Pressigny. They had written a post about the chapel before here, but had never had the opportunity to see inside.
The chapel is kept locked and if you want to see inside the best you can manage is to get down on your knees and peer under the old wooden doors. There is a very good reason for anyone interested in medieval history/art history wanting to make the effort. The chapel contains a danse macabre, or dance of the dead. Therefore, you can imagine that when Susan asked if we were interested in joining her and Simon on a visit, we replied with a resounding 'yes please!'
The chapel looks -and is- in good condition on the outside. The roof tiles and stonework are in good order and although the windows lack any glazing the whole gives no cause for concern. That is until you step inside.
The interior of the poor building is in a woeful state. Painted boards which make up its barrel vaulted roof dangle on the point of tumbling down. To one side, near the altar steps there's a stack of those which have already lost their fight with gravity. Bits and pieces of beautifully carved stonework also lie jumbled along the wall. There's wooden bracing to help keep the whole ediface from tumbling down. Marc Dimanche explained that there are plans to instigate a public subscription [pledges of financial support, large or small] which is the pre-requisite to gaining subsidies for restoration/conservation funding. Sadly, according to Marc Dimanche there is, seemingly, a lack of interest among the locals for restoring their 'patrimoine'. This is a huge pity as the chapel is pretty special. However, on the positive side is the fact that so much of the mural still survives despite the lack of the TLC it so desperately needs. 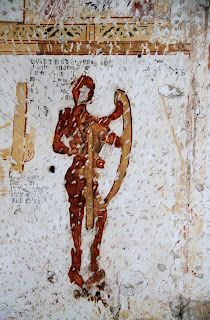 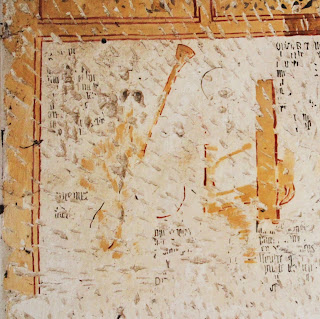 Musicians: the bagpiper, organetto player and the harpist

On both sides runs a wide band depicting the dance of the dead. The dance of the dead in the chapelle de tous les Saints is unusual as the murals depict both a male and a female dance. To the left is a men's dance, to the right is a dance of women. Both are accompanied by texts. On the far wall, to the left of where the altar stood, is an orchestra of the dead. There are four musicians: one chap is playing the bagpipes, the second an organetto, the third a harp and the last a pipe & tabor.

The dance of the dead or danse macabre appears in art in the 15th century. Surviving representations [about 80 all told in Europe] date from after about 1425. The earliest seems to have been a mural in the cemetery of the Innocents, in Paris which according to a chronicle was executed in 1424-5.  The north cloister of St Paul's Cathedral in London [the pre-1666 fire of London building] had a series of painted panels from around 1430 with texts by the poet John Lydgate. Lydgate knew the dance at the cemetery of the Innocents.
By the middle of the 15th century dances of the dead had become more common. In 1485-6 a publisher in Paris, Guyot Marchant produced a series of woodcut prints of the dance of dead. Accounts indicate they were closely based on the murals at the cemetery of the Innocents, but not identical. Guyot's figures are wearing the dress of his day, not that of an earlier time. The publication proved to be extremely popular and by 1490 it was in its third edition. A late medieval equivalent of a best seller.

The theme of the dance is simple: the living, irrespective of their station in life, whether spiritual [pope, cardinal, priest or bishop] or temporal [king, prince, lord, peasant or child] are made to dance with cadavers as a "memento mori" [remember you must die].
The dead--shrouded, partly corrupted or latterly more skeletal usually caper with enthusisam whereas the living are much more static. They aren't keen on joining the dance for obvious reasons, it confronted them with the frailty of life and the vanity of earthly things. It also reflected a medieval style of social equality: in death everyone is the same:- a cadaver. The dead they dance with are representations of themselves. They are not dancing with a personification of 'Death'.
To the medieval individual the afterlife was of huge importance as you either were saved at the Last Judgement or were forever condemmed to hell depending on what you had done with your life during your stay on earth. The worst thing that could overcome a medieval individual was to die unexpectedly without being able to prepare; hence the dance of the dead shows individuals of all ages.
Just as we suffer barrages of advertising exhorting us to plan our pensions & old age provision from the minute we start working, medieval individuals were continuously confronted by visual representations exhorting them to repent while there was still time. The dance of the dead is only one example of this.
We really hope that soon various wheels will slowly grind into motion and that action will be taken. We are no experts, but we suspect that the danse macabre in the chapelle de tous les Saintes  is a really rather special surviving example.
In the Middle Ages the chapel in Preuilly could have been a busy place of the living as well.  What is now the adjoing jardin public was the original burial ground. Records show that the cemetery of the Innocents in Paris was a bustling place: betrothals, meetings and judicial processes all took place there and it faced one of the largest medieval markets in Paris.

It would be lovely to see the danse macabre conserved and the chapelle de tous les Saints open to the public so that people could enjoy seeing it and so catch a glimpse of medieval life; to have a bit of bustle once again.


With grateful thanks to Marc Dimanche for permission to use images of his beautiful drawings which re-create the chapel's murals.
Posted by Niall & Antoinette at 20:17

That is wonderful! I've listened to Saint-Saëns music often enough.. now I have a sense of the visuals.
The paintings look as though they were prepared for / covered with a plaster skim at some date?

@Tim - yes it had been plastered at one time--hence all the little 'nicks' [and contributing to preserving what's still there.]

Really interesting. I know I've said it before, but your historical posts never fail to educate me. I didn't study History of any sort after the age of 12, and prior to that it was Ancient Studies about the Greeks, Egyptians and Romans.

Keep 'em coming. I hope the restoration work gets off the ground soon.

That is amazing, I hope that somebody decides that it is worth restoring, very sad. We found a church the other day, the door was open, and to my surprise there was a mural on the wall there. Very faded, but certainly there. We have searched the internet and found very little about it but I will be doing a post at some stage. Have a good week Diane

Good background on the danse macabre tradition. Marc will be really pleased to see this post. The drawings were done by Bertrand Walter and someone else, btw. Marc and I have agreed that if anyone else wants to look inside they can contact me as an intermediary. I'll post some of our photos shortly.

I do hope funds can be raised....and wonder at what point the plaster covering was removed.

Hello Niall and Antoinette:
This is absolutely fascinating. We have never before come across anything like it and how wonderful that you have actually visited this unique building.

The condition of the fabric is, as you say, deplorable. Something needs to be done, and quickly.

Fly: I believe the plaster was removed by the antiquarian owner in the 1960s.

That's tragic. It's amazing that it's still there and it really needs to be restored as soon as possible (or at least consolidated!)

Thank you for letting us see this.

@Gaynor - You're welcome
So do we! From what we know [yes we do have academic books on medieval death :-)] this is one coud be quite important/significant. We'll see what more we can find out.

@Susan- thanks [and this is just a quick overview of the topic! ;-)]

Hope Marc will be pleased -- he said he could make another when he gave me the illustration so I assumed it was his work.

@Jane & Lance - yes we feel priviledged to have seen it.

If you read Susan & Simon's excellent post [click on the link] you'll see that there is a history of good intentions which went nowhere in the face of indifference and apathy.

@AJ - you're welcome :-)
We hope the wheels will begin to grind--however slowly-- soon!

How fascinating -- and how fortunate that, considering the deplorable condition of the building, the murals are still recognizable. And thank you so much for the history lesson ... as others have said you have a wonderful way of explaining medieval history most compellingly. I do hope funds for restoration are forthcoming and SOON!

@ Broad - thanks :-) We're just very lucky to have (art)history like this on our doorstep!
fingers crossed...

Hope the chapel is saved. It looked an interesting place to visit and I would have loved to have joined you in having a look at it, but I have seen it through your eyes and words, so feel that I am at least familiar with this historic building. Hope the French save in.

What a great post on a truly fascinating subject, about which I know very little. It's amazing that so much of the fresco still exists, given the dreadful state of the interior, but they had better hurry and find the funds or there won't be very much of this little gem left to conserve, which would such a pity.

PS Having just read the linked post i stand corrected. They are not frescoes but wall paintings.

@Perpetua - if you ever divert via Edinburgh on your travels north stop at Rosslyn Chapel. There's a carved version there [on an arch].

We are very pleased by the publicity that is being given to the chapel and its contents by your blog and that of Susan and Simon. We can only hope that this publicity will be one step towards seeing that the gradual deterioration in the condition of both might be halted and even reversed. But for that to happen all concerned by the condition of the chapel will need to be prepared to be active, whether by ensuring continuing and wider publicity, by supporting the activity of concerned local organisations (e.g. The Preuilly Archaeological Society), and pressing for action by the municipal administration.

Hi, I came over from Susan's post. Very interesting. I hope I'll get to see it when I come to visit Susan and Simon in Preuilly. Then I can blog on it as well in the hope of increasing publicity.

@John - welcome to the blog.
Both Susan and I know specialists in the medieval wall pianting/danse macabre 'sector'.
We hope that interest expressed by them as to the importance/historical value --initial signs are encouraging-- might help the archaeological society in getting the mairie to undertake some action re application of funding for conservation. [It is an election year...]

@Fraussie - welcome
Do go and see it. Right now it is both lovely and sad at the same time; but well worth the visit.