Last Sunday we went to the plant fair at Verneuil-sur-Indre, a small village between us and Loches.  We've been having quite chilly and changeable weather lately but on Sunday, although it was a bit breezy, the sun blazed forth.

Every year the plant fair is held the Agricultural College [high school] which is based in a lovely 15th/18th century Chateau. The boarding college is part of a charitable foundation which seeks to give disadvantaged kids life skills. At Verneuil-sur-Indre they teach and train these youngsters so they can go on to jobs in the care/retirement,  the buildings maintenance or the horticultural sectors.

All the plants in the glasshouse had been grown by the students and wearing red t-shirts they were helping out on the day. Lining the drive we found commercial stands of specialists such as rose and lavender growers as well as a stall all about beekeeping. As we both adore lavender we succumbed to buying 3 pots of 'lavendula officinalis'. 'Original' lavender if you like, which can be used in cooking. We also ran into friends Susan & Simon who were shopping for plants for their potager and garden.
Very little information about the Chateau at Verneuil-sur-Indre exists.  Somwhere around the middle of the 15th century the tower house [grosse tour] was built probably by the d'Orion family. By the late middle ages the tower house had replaced the donjon. 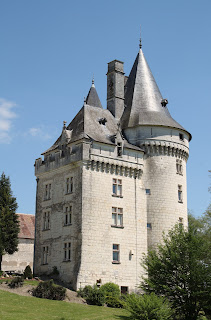 There is a question mark as to when the new house was actually built but the most popular theory suggests it was around 1760 when the Chaspoux family, who by then held Verneuil-sur-Indre, were elevated to a marquisate. It is in the Louis XIV style [originally mid 1600's] which had a revival in the 1760's.

The chateau itself is an interesting combination. It is made up of two separate  buildings. Mostly when a new owner was seeking to modernise or 'keep up with the Jones' they either pulled the old building down or incorporated the old into the new as a message of continuity. At Verneuil for example one could have expected that the builders of the new house to incorporate the 15th century tower house in a corner of the new house; but they didn't. There was, at one time, some kind of covered walkway linking the two but it was removed during renovations to both buildings at the end of the 19th century. Now the 15th century castle stands separately, only a small stone's throw away from the 18th century house.

We really enjoyed the opportunity to see the chateau as well as have a look at all the plants on offer.
Posted by Niall & Antoinette at 10:23

I couldn't resist plant fairs...but never found this one, more's the pity.

@Fly - well we cann't either and such a bonus to see the buildings. Normally we only see them from the road.

Oh, I do envy you two your architecture! Gorgeous buildings in lovely surroundings and weather and a plant fair to boot. We have lovely scenery and pretty decent weather in Normandy, but so much of the best architecture suffered in the war. Sigh....

@Perpetua - not a bad place to be at boarding school if you are a disadvantaged youngster trying to gain some skills to allow you to be employable is it?

I have just enjoyed catching up on your recent travels, Edinburgh, Dorset and now back in France. This event looks like the sort of thing we would enjoy, especially the opportunity to see the chateau as well.

@Lindy - Dorset was lovely and there's loads more for us to see the next time we are on our way back from one of our family visits to Endinburgh.
Nice to be back chez nous though.