Yesterday evening round 6pm-ish the cuckoo was joined by another and a spectacular arial display was the result. There was lots of chasing and follow the leader acrobatics. Every so often there would be a brief cessation in the zooming over our house and trees and a cuckoo song would ring out. Much more frequently they were both -- as far as we could tell -- giving their oddly sounding flight call which is very different indeed to the song. If you wish to listen there are numerous recordings of the different sounds a cuckoo makes on the British Trust for Ornithology page for the cuckoo. Just click on the sounds link.

This display of arial antics lasted, in total, for at least 45 mins. and must have exhausted the birds. They have, after all, just migrated up from south central Africa. You can read about Clement the cuckoo on the BTO website: he was fitted with a tracker in Thetford, Norfolk and went south to the DR Congo.

It was entrancing to watch and we scurried for the camera and followed the arial display as best we might. We did manage to get a few decent photos. 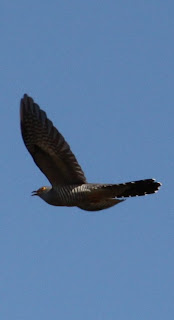 Super fantastic! What a joy!

Wow! Well done on getting so many usable photos! And lucky you getting to see something I bet not many people see.

Brilliant photos !!
I have never seen a cuckoo and we don't hear them all that often so this must have been a wonderful sight.

@Susan - it was impressive in that it went on for such a while. It wasn't just a quick scrap.
We took loads of pics. These are among the best, but got a few more good ones too.

@Jean - last year we --after a bit of practice-- spotted one in the trees. Neither of us had ever seen one before, nor hardly ever heard them.

Ace! Well spotted and caught on camera... I'm a trifle green!! No, make that totally green!!!
Never seen a cuckoo that close... we've had them fly over... but from wood to wood... ie... ridge to ridge.

Would this be their courting ritual. Or were they just enjoying being birds! We have not heard a cuckoo yet, but should have seeing as how we must be near their flight path. We did see some geese heading northward a few days ago. I stood and watched them for ages. I am totally in awe of the migration effort. I shall even think more fondly about cuckoos now I know that they also are migratory.

@Tim - classic case of being in the right place at the right time. ie fluke :-)

@Vera - we thought that at first too. But we did some finding out and now don't think so. We think it was a territory fight. We heard no female calls [different to male] and they even had a scrap in mid-air.

What amazing photos. You're really lucky if you catch a glimpse of a cuckoo over here. These views are great

@AJ - this was sheer luck! Seeing isn't so easy; but we do have cuckoos round us and hear them clearly.

I am soooooooooo impressed with the quality of those photos!
amazing

@John - Thanks :-). Long live the digital camera. Could never have managed this in 'the old days' of 35mm film.

For some reason Blogger would not let me comment yesterday...
The link to the bird song was super and the photographs were out of this world!
I am so envious that not only could you see all this you could also show it to us all!

@Fly - the BTO site is very good. We never knew about these different sounds a cuckoo makes.
Thanks re photos. Luck rather than skill played the lead role :-)

We always like to know the cuckoo has arrived despite his reputation, but is it earlier than normal? Great you got some photos.

@Lindy - I don't think the cuckoo arrived earlier than normal for round here.

It can be really difficult to get these kinds of shots. Doesn't that blue sky look stunning!

Thanks for your visit to my Paris blog and your kind comments re Monet's Garden. Today I posted some stunning shots of Biarritz you might like to see sometime.

@Denise - welcome :-)
we're being spoilt as we've had days and days of brilliant blue skies.

Fabulous photos! Who needs television when you can watch a spectacle like that right over your head!? Martine

@Martine - it was an amazing sight and we had front row seats! [glad to see you online again :-)]

What superb photos and how very lucky you were to see them for so long. I've never knowingly seen a cuckoo, though I've heard them all my life. Thanks for the birdsong link too. Fascinating.

@Perpetua - we found the BTO site helpful when you want to know a bit more than the RSBP's site offers.