Katinka does not always take kindly to our excursions. Not that she minds us going as much as she feels it is unfair that she can't come along!
We've been to Beaumont-Village a number of times. It's a small village very close to Montrésor. When we were looking for a house last year we looked at one just outside the village. We must have been there about lunch time because at the time we noticed the Auberge and the number of little white vans parked outside it. This is always a good sign in France--it means the place will serve good food: 'bon qualité, bon prix'.
We went to test this theory last autumn and again in February when we wrote about the glass at Montrésor. Both times we weren't disappointed, they served excellent home cooked food.
Earlier this week we were in Beaumont-Village again because, apart from the great Auberge, Beaumont-Village has another claim to fame which we'd been unable to see on the previous visits. So operating under the philosophy of 'third time lucky' we drove over. As Niall aptly remarked, 'if the building isn't open now in the tourist season it never will be'! 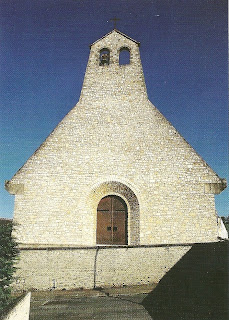 The building in question is a very modern, some would say ugly, church. Inside however are preserved a number of frescos which came to light when they tore the original village church down some 60 years ago.
Postcards from the late 19thC or early 20thC show the church to still be in a reasonable state with its roof intact, but it seems a storm early in the 20thC so damaged the roof that dereliction rapidly set in. By 1949 there was no other option but to tear it down. It obviously took some time to find sufficient funds to build a new church but by the early 60's the villagers had their new building.
The medieval frescos date from the 13th and early 14th century and they show, amongst others, St Martin and St Sylvain to whom the new church is dedicated. Whoever created them had a thing about feet size!! I was tempted to title this post 'big foot'!
Naturally we also stopped for lunch at the Auberge--one has to time these visits properly! This time the lunch menu - €11.00-  was: crudities or terrine, cabillaud [cod] or cuisse de poulet with either potatos or a gratiné of vegetables, cheese, dessert: home made rubarb tarte. Wine and coffee are included in the menu. The only spoiler was that due to the weather we weren't able to sit outside.
Posted by Niall & Antoinette at 16:28

Hello Niall and Antoinette:
What a delight. A church containing the most wonderful frescoes and a delicious lunch for very little money. Like you, we find these quite simple pleasures are beyond worth in what they add to the value of life.

Ahh! The perfection of simplicity!

@Jane & Lance-- It is indeed these 'small bits of history' as Niall & I tend to call them and the excellent lunches that contribute to make living here such a pleasure.

Sounds like a perfect day with the historic visit and then the lunch. I miss those French lunches...

@Craig-- I'm sure you do,{sending over a virtual French lunch} but then a proper country pub is also lovely; especially in winter.

Interesting visit and great lunch! Btw, do you take yours cats for a drive every now and then? Martine

@Martine--Shadow, very aptly named, has hysterics at the thought of going anywhere in the car. Katinka seems to have some dog genes in her make up. When she goes to the vet she sits on Niall's knee and watches the world go by. She's quite happy in the car and has no fear. She barely moves out of the way when we drive off and nearly stowed away in an EDF van that came to the house!