Just some more photos of St Savin which we wrote about yesterday.
This chap was sitting outside catching the sun with his dogs and donkey, which he'd unhitched from his pony trap. The donkey was very vocal and his braying followed us into the abbey. 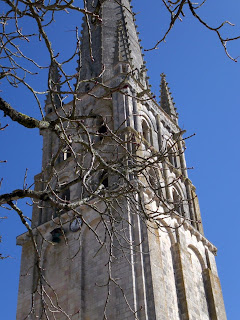 Romanesque porch tower with very gothic spire. It was a lovely early spring day with cobalt blue skies.
The pillar was decorated with a repeating pattern of geyhound-like hunting dogs in ocher and russet. 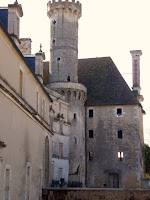 Spotted this 19th century faux medieval tower stuck on to the 17th/18th century abbey range. Extra staircase perhaps?
These angels are all curves as they bow down before Christ in Majesty

We had the place to ourselves which was a real treat. A German tour group was leaving as we arrived but for the rest there was only the odd individual. A lovely advantage of being able to visit places such as this out of season.
Posted by Niall & Antoinette at 12:52

The tower houses a lift (elevator). Don't you love those candy cane columns?

I like it--a lift! Someone obviously didn't like climbing to the top floor :-).
Columns--> absolute joy; and the beasties decorating some of the capitals.