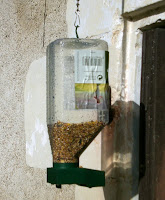 In addtion to the peanuts and suet balls we hang in the Maple bush we also have one of those bird feeders which you can fill with seed and then hang up. This hangs outside one of the livingroom windows. The seed fills the little trough-like tray at the bottom and the birds pick up the seeds from there. As the seed gets eaten more seed trickles down.

Or so you would have thought. The Blue Tits are fine, they fly in 1 or 2 at a time and perch happily, picking seeds and then flying off. But there is one larg-ish Great Tit who comes to this feeder and has absolutely NO table manners whatsoever. The seed is a standard mix which contains amongst others sunflower seeds.
It seems  'monsieur' is used to  fine dining--only sunflower seeds will do. Perhaps they are are the equivalent to 3 Michelin star dining in bird world!
As a result, when he flies in he roots about in the tray vigorously spraying seeds until he finds a sunflower one. He does this so energetically that the rejected seeds ping off the window glass!

We've had to sweep up after 'monsieur' several times now and the amount of seed he's sprayed on the ground under the feeder is impressive. In fact so much so that when we swept it up a couple of days ago there was more than enough to put in another container and pop it on another window sill.

Based on the evidence this morning it needs doing again. We'll be able to sweep it up later if the rain stops and ground has dried out a bit.
Posted by Niall & Antoinette at 15:13

The same thing happens in our garden in Derbyshire. We now have a group (flock/gaggle ??) of pheasants that troop in from the wood behind our house to pick up the small birds' leftovers. It would be very tidy if they didn't make such a mess of the lawn.

I've now spread the second lot of 'reject' seed on an open space (too damp to go in feeder) where we can see it from the living room in the hopes of attracting some other species, but I suspect like at yours the pheasants will gobble it up

This is on a par with eating only the black and red wine gums out of a packet and leaving the other ones!

Where we've hung ours, the pheasants also are doing the cleaning/gleaning... however, I've had to modify ours after a Blue-tit got inside when it was almost empty... there are now two wires blocking the way.
The tit was fine... doing threat displays at any approaching bird, but otherwise pecking away at what seed was left... and probably could have got out the same way [if it remembered]... but with the cold nights, I wasn't taking the risk.
A newer modification is a length of Bourgeil cork cut to fit the front end of that huge opening and held in place by a small screw through one of the drainage slots in the base. Our 'mon-sower!' now cannot get as much seed out in a scoop of the foot and seems to have stopped using it... no change in seed though! Now polite diners seem to use it and it lasts a few days.
Have you noticed any that seem to think that they can get at all those loverly seeds through the side?

Tim: an number of the Blue tits peck at the clear plastic before moving down to the tray.