All this wet and sometimes windy weather which has visited us since December has caused trees to fall. We've seen a number of uprooted specimens while out and about the departement.
Now it has taken its toll of one of our pine trees. To be fair, the tree was pretty much deceased already, but we'd not chopped it down as it was a favourite of the woodpeckers and home to plenty of invertebrates of all kinds. 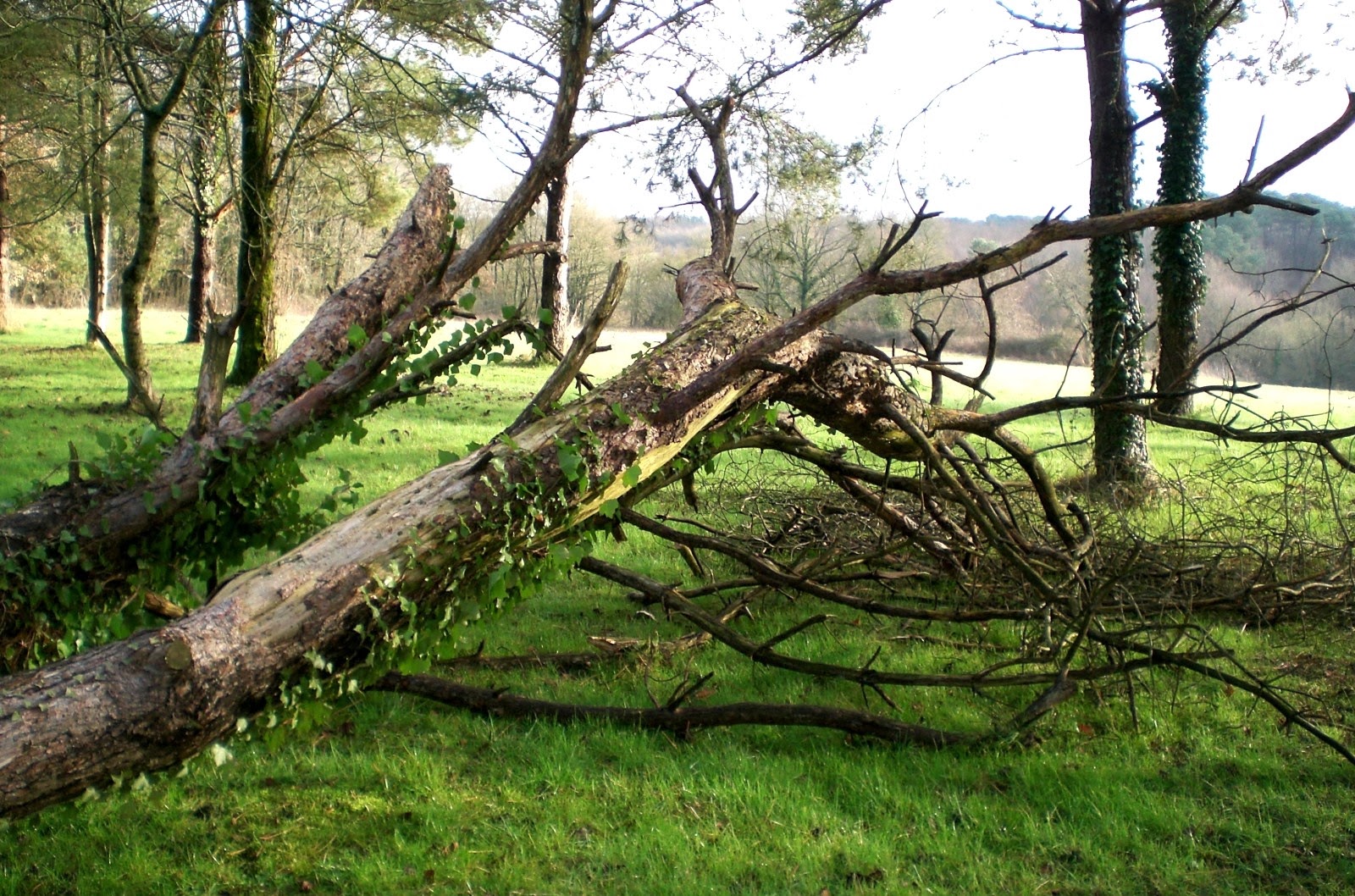 We'd decided to let it slowly fall apart in its own time. As quite a few branches had already fallen off it wasn't too much of a risk. However, boggy ground and some windy weather have speeded up the process and two days ago it just keeled over. It must have happened during the night as Niall spotted it when he went to get wood from the woodshed in the morning.
We'll leave it for now as it is so wet. Once things dry out we'll decide how much we want to clear and how much we want to leave to rot into the ground.
Posted by Niall & Antoinette at 15:36

Always a shame to lose a tree, nomatter how dilapidated.....

I feel sad when a tree takes a tumble. I would take off some of the upper growth, and leave the lower trunk and roots to go back to nature.

I'm with Vera...
but stack what you take off....
on top of the lower trunk...
plant a Clematis in the shade and let it ramble over the pile....
that way the birds and insects will be happy...
and so will you with the flowery focus!

@Fly - to be honest we're not that surprised it committed arboreal suicide, but the woodpecker won't be very happy.

@Vera - pretty much our thoughts exactly. We did the same with a dead pear tree when we first arrived.

@Tim - that is a brilliant suggestion. I love clematis so it is an ideal solution and it will catch enough sun :-).

Now what's the betting that when we come to planting it the ground will be brick hard!!

Dig the whole hole now!!
Avoid it when stacking the wood...
Bob's your Auntie!

Bottom picture...
dig it just on the NE side of the stump end...
it will only get the morning sun then...
and will be shaded for the rest of the day.

Fill it in now with leaf mould or compost, ready for planting when the time comes.
There is a nice blue-flowered scrambler... like the yellow C.tangutica with bell-like flowers... but not such a monster!!

I think it is one of the "integrifolia" group...
or...
if you like yellow, you could go with C.tangutica and just cut it back!

I was just looking up blue groundcover clemmies and found this:
http://www.thebattery.org/plants/plantview.php?id=32
Clematis x jouiniana 'Praecox' a hybrid

Charles Dancer the clematis specialist...
we've seen and admired his plants at the Harrogate Flower Show...
I found the one I was thinking of on the above page....
C. integrifolia Yvonne Hay - Dark blue flws sweetly scented.

Have fun!!
Given your dappled shade, you could put them elsewhere as ground cover...

We have had to have trees chopped down because they were old, too big and dangerously too near to the house. It always seems a tragedy to lose a tree but if you can "recycle" it as per the suggestions that would be brilliant.

@Tim - lovely I like blue! Thanks for the suggestions :-)

@Jean - We have recycled others .... into the wood burner; and again this time we'll use some of the branches for kindling but the majority will be stacked to 'go back to nature'.

Tim's clematis suggestion is great and one we intend to follow up on.

Tim's comment make me wonder where French gardeners buy their plants. I know they are keen gardeners, so I figure there must be some good sources for plants. I've only visited garden chains and the choices there are limited.

Carolyn...
use the internet to buy your plants in France...
from Belgium or the UK!!
It is still European and will carry a plant passport.
In fact...
Use the Interweb as both a source of info and a source of plants!!

The chains are restricted...
but also try your local "pepinerie"... a lot of them carry plants other than trees or shrubs.
Bricomarché can be good occasionally...
but it is a franchise operation...
here, the one at Yzeures sur Creuse is very limited...
mainly restricted by space...
but the one at St.Maure de Touraine is newer, larger and has a huge outdoor nursery area.

But please, look around for, and visit, local nurseries and producers...
and don't forget, in the spring a lot of nurserymen/women will have a market stall at least once a month!!

And visit plant fairs... we have a huge spring "do" at Verneuil-sur-Indre...
nurserypersons visit there and you can pick up plants at reasonable prices.

Also, don't forget that many plants sold as annuals are often perennials or short-lived perennials...
Primulas being a case in point...
often sold and grown as annuals, they are hardy perennials!!

What a shame, but Tim's suggestion of the clematis is brilliant. Do leave a good chunk for the wee beasties to eat and live in, but it will be good to have the extra kindling too.

@Perpetua - oh the wee beasties will get their fair share :-)