Boats on the Cher

Needing to be up in Tours last Wednesday we decided that, as the day was so lovely, we'd drive a little along the river Cher towards Villandry before cutting across country to head home.
At Savonnières we stopped and had a quick look at the church as well as just spending some time watching the river flow over the weir. The level was quite low, certainly much lower than on our previous visit when we watched a blue heron being displaced from his fishing perch by a white egret. As usual there were a couple of traditional boats moored in the river above the weir. A little bit of research informed us that the most common types of boat to ply the rivers were the gabare and fûtreau.
By now there was a flurry of activity in Savonnières as cyclists, other visitors and locals hurried to get bread at the boulangerie before it closed for lunch. We let oursevles be tempted into staying on for lunch and in the parking lot of the restaurant we found the boat below: 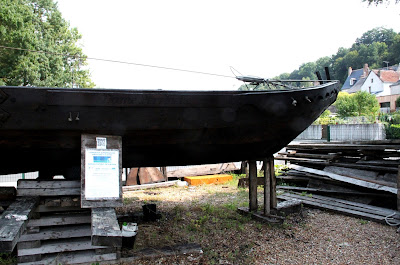 The notice pinned to the side said she was the "Dame Perinelle" and that she was a boat of historical interest as decreed by the 'Fondation du Patrimoine Maritime et Fluvial'. In fact, the "Dame Perinelle" is an historic reconstruction of a mediaeval river boat used on both the Cher and Loire of a type know as a 'scute fluvial' or 'scute de Loire'; a boat with an extremely shallow draft which allowed them to navigate successfully far up river. She even has a whole paragraph to herself in the French Wikipedia entry on the two types of 'scute' - coastal and riverine. She has been built using only authentic materials and tools, exactly as would have been the case in the Middle Ages. So, for example, she has no nails, screws or bolts and is caulked with plant matter.
We'd heard of the word 'scute' before, but only in connection with the coastal type of boat. In Friesland, The Netherlands, there is a famous sailing competition called "Skûtsjesilen" where they race skûtsjes [the coastal version] which were once the workhorses of the waters along the Belgain and Dutch coasts; much as the riverine 'scute' was on the rivers Cher and Loire.

As usual it just goes to show you never know what you're going to stumble on! It was a lovely surprise to find a mediaeval boat in the car park as we went for lunch; which incidentally, was excellent indeed!

N&A - what an informative post.
Really enjoyed the read. We stayed at Tours on our last visit. We will make a point of visiting more often next year while staying in the Loire. Hope to meet up with some cyclists as well. Taking the bike.
Leon

Thanks for this. I've been telling clients it's a gabare. At least I get the stuff about construction methods right! I've never seen any info about this boat, so your post and links are very welcome indeed.

Interesting. Your photos showing sun and shade, trees and water, capture the feel of a late-summer day.

That was an interesting read. I suppose that the river Adour would also have had shallow boats up and down it in days gone past, but now it only has kayaks!

There used to be a group of enthusiasts at Savonnieres who were involved in the revival of traditional Loire craft...goodness knows if they are still around.

which gives a lot of information on traditional boats in general.

I saw a gabare being built near Chinon, using a steam box to make the planks supple enough to be turned up at the prow.

And sailing one in a high wind is something else!

@Leon - As perhaps you may know there's a cycle route which runs from Tours along the Cher to Villandry. Most of it is specifically for cyclists only.

@Susan - you're welcome. We knew of the gabare but the others were all new to us and interesting to learn a little about.

@Carolyn - thanks it was indeed a classic late sumer's day. In fact, the 'feel' along the river was quite Dutch.

@Vera - Most likely! As we understand it there were regional variations of these flat bottomed boats all over France.

@Fly - Thanks for the link. Did come across them in passing and have no doubt that they had quite a few fingers [if not whole hands]in the Dame Perinelle pie.

Beautiful photos and fascinating post about the boats.
It is as you say, interesting what you can stumble upon in search of a bit of lunch !!

@Jean - thanks :-) It tickled our sense of the absurd that you turn into a gravelled parking lot and find yourself face to face with a fairly important hstorical/archeological reconstruction effort.