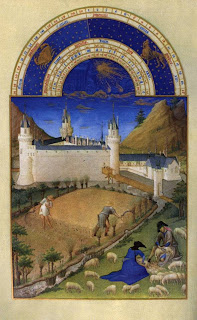 Makes one think of autumn not high summer, but the grain harvest has been going for at least 2 weeks. Round here they grow a lot of colza [rape seed], wheat and barley. Yesterday evening Eric came to combine his wheat field. North-facing it is one of the last to be harvested; most, if not all, have been baled and many fields are even bare and have had the bales removed.

Despite the drought the field looks to be in pretty good shape. In a good year Eric'll hope to have an average of 5 or 6 ears to a plant. This year he looks to have a return of about 4 to 5; not bad when we've heard of others who have had about 3 or even only 2 to a plant.

He arrived about 6pm and methodically chuntered up and down in his giant green combine. Close up the thing's pretty big but it's by no means the largest of these contraptions we've seen, some are so large that they more than straddle one of small local roads. So much so that you can't pass nor can oncoming traffic get by without the thing moving into a field entrance.
It is a world away from the manual reaping of the middle ages. If you magnify you can just make out the poppies and cornflowers in the wheat in the Tres Riches Heures illumination top left. Sadly the chateau pictured, Clain in Poitiers, no longer exists.
At about 11:30 pm he called it a day and the giant headlights left. When we went to have a look this morning about 2/3 of the field had been cut.
We've been busy all day here at the house as we have visitors coming to stay from tomorrow, but as of writing he has not yet returned to cut the rest.

I know I've said it before, but I love the illuminations. The colours are wonderful

Enjoy your visitors and your well deserved holiday. Spare a thought for me...3 more weeks left!

Aren't they just! That's why we try and sneak one in every now and then :-)
My 1/2 aunt and partner are coming for a bit. Both have very snazzy cameras so hoping to pick up some tips. No doubt posts will be a bit more touristy in days to come.

Hang in there--last few weeks are always messy. We'll order you up some good weather.

I was looking at the tapestries in Chenonceau the other day - the ones of June, July and August all feature harvesting. It makes you realise how long it took to bring in the crop in earlier centuries compared to now.

Love the landscape photo showing the before and after!

@Susan-- and how backbreaking! Can't imagine being bent over scything for ages. And as a peasant farmer you had to harvest your landlord's grain first and then you had to find the energy to deal with your own small patch.

@Carig--just love the abstract patterns the rolled bales make on the harvested fields.