Last night, not long after 10pm we went out to watch the ariel ballet of the bats. There are three of them--we've written about them before. Thankfully, they no longer use the walls behind the shutters to roost and must have found somewhere far more suitable. Their acrobatics as they flit around, over and along our roof is a joy to watch. We think they're common pipistrelle. 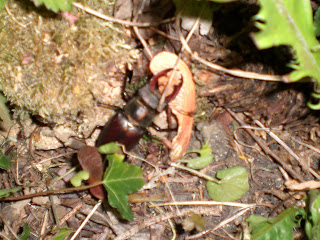 Anyway I became distracted by quite a bit of rustling around the foot of one of our clumps of lilac suckers. We have two of these clumps--originally both had flowering lilac bushes but these have, at some point, died or been cut down. We thought it might be voles or mice rustling through the leaf litter and Niall said he'd heard it before in the same place. Eventually, as it continued, curiosity won out and I went and got the flashlight to have a look. 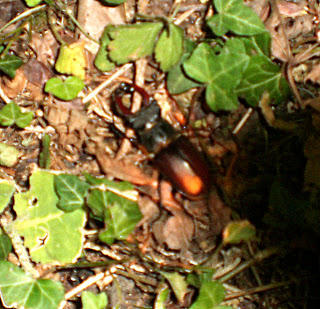 As we got closer we could also hear faint clacking sounds which certainly intrigued us.  What we found were male stag beetles crashing round the old stumps of the original lilac. We counted at least 5--two were fighting each other which explains the faint clacking sound. We are complete ignoramuses when it comes to beetles. Thanks to some BBC wildlife programme I once watched I recognised these as stag beetles and knew they are protected; but for the rest ... we know nothing.
Presumably they have all homed in on a female. Not that we saw one--just the males with their characterisitc pincers.
Posted by Niall & Antoinette at 17:45

I don't know any more than you do, but I'm sure Susan and or Tim F. will!

Interesting to look at, but I for one would not want to meet any let alone 5! Makes you think twice or thrice about walking around in the woods -- or anywhere else -- with bare feet! Cheers to the BBC and congratulations to you for knowing what they are ...

@Gaynor--that's what we're hoping as we really guessing as to why they were all together like that.

@The Broad--yup good old BBC and agree wouldn't like my toes nipped either: they were about 4cm!

French stag beetles are considerably larger than British ones, although the same species. I don't think anyone quite knows why. Maria Fremlin has an excellent site about them and is always keen to hear from people: http://maria.fremlin.de/stagbeetles/index.html. Her current interest is a bit gruesome - if you find a still living but badly damaged stag beetle, be sure to email her to help her research.

@Susan-- thanks for the site I'll give her what little info I have.

For me, they look the same size as the ones I used to encounter in rural England but of course I never measured!